Liverpool manager says Argentinian is the greatest player of all time 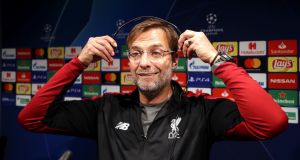 Jürgen Klopp said Liverpool must be willing to suffer against “brilliant” Barcelona to shatter Lionel Messi’s dream of winning the Champions League for a fifth time.

Messi pledged earlier this season that the newly-crowed Spanish champions would “do all we can to bring that beautiful trophy back to the Camp Nou”, having seen arch rivals Real Madrid win it for the past three years. The Liverpool manager accepts his team must overcome one of the toughest tests in football to reach the final for a second year running and prevent the great Argentinian equalling Cristiano Ronaldo’s haul of Champions League winners’ medals this season. But it is a challenge that excites Klopp, who has not lost any of his 10 European knockout ties with Liverpool.

The Liverpool manager, asked whether Ernesto Valverde’s side represent his toughest European opponent so far, replied: “I’m not sure if it’s allowed to say it here but Real Madrid wasn’t easy as well. But because I’ve beaten Real Madrid a couple of times one day I got a table in a full restaurant in Ibiza. When they realised I was Jürgen Klopp they said: ‘Jürgen Klopp, you beat Real Madrid! Come on in’.

“Out of all the matches in the world, Barcelona is one of the toughest games to play ever. Playing Manchester City in our league isn’t a walk in the park either. There are a lot of difficult games to play and this is another one. We don’t want to avoid difficult games because it means you play for something. Being perfect in this game is not possible, we will make mistakes. Will we suffer? Oh yes, 100 per cent. Will there be moments when we have chances? 100 per cent. Will we use them? I hope so. That’s what we try to do. We need to be completely free.

“I know people say we’ve been better in the past couple of years and that Barcelona aren’t the same Barcelona any more without Xavi and Iniesta but they are a brilliant team. This is our second year at this level. They have been here for 20 years. It’s so difficult but I couldn’t be more excited about having this opportunity. My players feel the same.”

Klopp hailed Messi as the greatest player of all time when asked to name his top five footballers, admitting Pelé was his father’s favourite but he was too young to have seen the Brazilian live. “Do we concentrate on Messi?” he said. “We should, in certain moments, but then they have 10 world-class players around who can decide the game. They have the highest quality team, they are already Spanish champions. Messi said before the start of the season that they wanted to bring back this cup. That sounded already like a threat to me. Now we are here, we want to go to the final as well. If we can show that tomorrow night that would be cool.”

Barcelona are unbeaten in 31 Champions League home games – a competition record. Their formidable range of talent includes the former Liverpool pair Luis Suárez and Philippe Coutinho, who are expected to complete Valverde’s forward line against their former club. Klopp declined to be drawn on whether he regretted Coutinho’s £142m sale to Barcelona but admitted Liverpool’s subsequent improvement exceeded his expectations.

The Liverpool manager said: “I don’t want to say too much because I know a lot of people make shit stories about that. Yes we miss Phil Coutinho a lot because he’s a world class player. I loved working together with him but we’ve had to deal without him and we’ve done well. That’s all I can say about that. When I first heard he wanted to go to Barcelona, I couldn’t imagine that we would do this well without him but we did and it’s all good.”

Liverpool have never lost in four visits to the Camp Nou, winning twice and restricting Barcelona to just one goal in those four matches. The Anfield club has also beaten Barcelona in two previous European semi-finals – the Uefa Cup meetings of 1976 and 2001 when they went on to win the trophy each time. Klopp has Roberto Firmino available for selection after the Brazilian forward recovered from a slight muscle injury.

Klopp admits his players are “fighting like crazy” to ensure an outstanding campaign in Europe and at home ends with the first trophy of his Liverpool reign.

He added: “What can we do more other than winning the final? That’s three times in a row we’ve reached this stage in European competition. In the first year we got to the final and lost, sorry. Then we got to the [Champions League] final and lost it, sorry. We can’t do more. We don’t need extra motivation. We are fighting like crazy.

“In that Europa League season we were pretty much on three wheels in that final. Last year, everyone saw it, we were pretty unlucky against a very strong team in the final. We can not do more. It’s an outstanding achievement to be in the semi-final for the second year in a row. Now Barcelona is waiting – a tough, tough opponent. But we still want to try to do it.”