Cork goalkeeper made European debut for Liverpool in win over Ajax 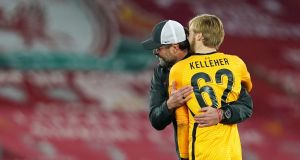 Liverpool manager Jürgen Klopp praised Irish goalkeeper Caoimhin Kelleher after the Corkman kept a clean sheet on his European debut in the 1-0 win over Ajax at Anfield on Tuesday.

The young goalkeeper said afterwards that he had been receiving messages from home since the news emerged that he would be starting.

“My phone has been hopping since I got in. But big thanks to every one there, all the support and messages I’ve been getting, I’m thankful for them,” he told BT Sport afterwards.

Prior to the match the focus had been all been on Kelleher starting for Klopp’s side because of Alisson Becker’s injury but the 22-year-old did not put a foot wrong.

He produced a number of good stops but saved his best for last to keep out veteran striker Klaas Jan Huntelaar’s close-range header.

“It is a situation where I have to say it was easy to decide for Caoimh, because he deserves it, but difficult to decide against Adrian because he has done well for us,” said Klopp on his decision to give the Republic of Ireland Under-21 international his European debut.

“He did a really good job but tonight we needed the package of Caoimh and he is a top talent, really good shot-stopper and top footballer.

“In the end it is about keeping the ball out the net and he did that twice and he did that in an exceptional manner. He will either sleep really well tonight or not at all.”

Kelleher joined Liverpool’s academy in 2015 and made his competitive debut against MK Dons in the EFL Cup last year. After Tuesday’s win at Anfield the young goalkeeper was pleased with his performance.

“It was amazing to make my debut in a Champions League game, it was massive for me. Obviously the most important thing was to get the win and qualify, which we did, so yeah, great night”, Kelleher said.

“I work every day in training to make sure I’m ready when it comes to a game, thankfully tonight I was able to make a good few saves.”

The 22-year-old was impressive in shot-stopping duties but also with the ball at his feet, something he says is made easier by the quality of players in front of him.

“We’re not here just to take part, we want to push every day and play as many games as we can. You can see we are making a difference and improving the team, so yeah, it’s good.”

The match threw up more injury worries, with respective ankle and back problems for Andy Robertson and Jordan Henderson, and Klopp is keeping his fingers crossed for good news.

“Both played through so I would say we have now two days more than we had last week so I think (they are OK),” he said.

“Things like this show up the next day a little different but in the moment I am positive about it. That is a problem for the next few days but not tonight.”

With injuries mounting, Klopp admitted it was a relief to secure top spot in the group and ease the workload on his ailing squad.

It rendered next week’s trip to FC Midtjylland a dead rubber and means Klopp will be able to rest players, with the injury list up to nine now as Alisson’s hamstring injury is likely to rule him out for 10 days at least.

“Massive. I am actually over the moon with the attitude and character we showed tonight,” Klopp said.

“We had great football moments, could have scored early, defended well, had counter-attacking chances in the second half, scored a wonderful goal and had to defend with all we had.

“I am very happy about the result and the performance in the circumstances.”

Klopp said he did not see the goal properly at the time but praised Jones for anticipating where the ball would land.

“Honestly it was a good cross from Neco because it is not a cross directed to the goalie but usually it’s a ball going for a goal-kick and no-one reacts,” he added.

“I have to watch it back to see the goal but I saw it was in the net and that is enough information for me.”

Ajax coach Erik Ten Hag admits errors were costly in both their encounters against Liverpool, having lost 1-0 in Amsterdam to Nicolas Tagliafico’s own goal.

“Yes, it is just kicking an open door isn’t it? We create opportunities, we don’t finish those and the goals we had against us in Amsterdam and here are personal mistakes,” he said.

“We are not used to this from him (Onana). He is a fantastic goalie but he can make mistakes as well. It just happens.”

Ajax now have to beat Atalanta in their final game to remain in the competition.

“We have to win next week. That’s the only thing that counts,” said Ten Hag.