Jürgen Klopp fumes at referee after Neymar and PSG’s antics

‘The number of interruptions in that game was just not cool’ 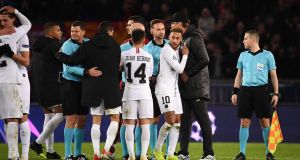 Jürgen Klopp accused Paris Saint-Germain – and Neymar in particular – of making Liverpool “look like butchers” as his team suffered a third consecutive away defeat for the first time in the Champions League group stage.

The Liverpool manager admitted the French champions merited victory for a dominant start that brought goals for Juan Bernat and Neymar before James Milner scored a penalty in first-half stoppage time.

The referee, Szymon Marciniak, initially awarded a corner after Ángel Di María’s clear foul on Sadio Mané, reversing his decision on the advice of an additional assistant referee.

He also booked six Liverpool players compared with two from PSG. The home midfielder Marco Verratti was one of those booked for a dreadful foul on Joe Gomez that could easily have resulted in a dismissal.

“I know that now the main headline will be ‘Klopp said’ but the number of interruptions in that game was just not cool,” Klopp said. “Two times in a row we won the fair play award in England and tonight we look like butchers after the yellow cards we had. It was clever of PSG, especially Neymar, but a lot of other players went down like it was really something serious and we were not that calm any more.

Klopp added: “There are a lot of things you can do. You can give yellow cards for everything. If you go down, if you act like you die and then the next moment you get up, yellow card. It’s unsportsmanlike behaviour. In the end, it’s hectic and everyone is going down. I don’t want to say Paris didn’t deserve and I don’t expect help from a ref, I just expect him to calm all these things down. It doesn’t happen that often, to be honest, but it happened tonight.

“The crowd was up, it’s really difficult and we were not calm enough. Even Joe Gomez got a yellow card. He’s the nicest boy on this planet and he was close to getting a red. But we lost because they scored two, we scored one and we didn’t play good enough.”

Klopp insisted Verratti deserved red for his challenge on Gomez. “I had a very good view of it and it was for sure not the same colour as these 500 other yellow cards,” he said. “The penalty – I have no idea why it was a late decision. It was not even a foul for him, unbelievable. But it’s over.”

Liverpool must beat Napoli 1-0 or by two clear goals on December 11th to reach the knockout phase and Klopp admitted: “We need Anfield again and we need to create an atmosphere which is pretty special.”

Tuchel claimed Klopp’s concerns were unfounded and merely a distraction from Liverpool’s subdued display. “I don’t feel it is such a big issue,” he said. “We suffered a lot of fouls. You don’t have to commit a lot of fouls, especially if you are 1-0 down. If you are 1-0 down then don’t commit 10 fouls in the next 10 minutes. I didn’t experience it this way around.

“When I lose a big game I am angry and I will talk about other stuff to bring attention away from my team also. I hear Jürgen has his opinion and that’s fine. I’m talking about the game.” – Guardian service