City need a point against Shakhtar Donetsk to reach last-16 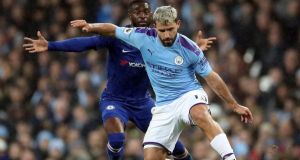 Pep Guardiola said that, barring a “miracle”, Sergio Agüero will miss the Manchester derby because of a muscle injury.

The striker, who developed a problem with his thigh during Saturday’s win over Chelsea, will miss Tuesday’s Champions League home game against Shakhtar Donetsk, plus the matches against Newcastle, Burnley and, almost certainly, the visit of Manchester United on Saturday week.

“He will be out a few weeks,” Guardiola said. “Exactly [how long] I don’t know.

He will miss the derby – maybe we’ll have a miracle but I don’t think so.”

Agüero’s absence offers an opportunity to Gabriel Jesus. The Brazilian has five goals in 16 appearances, including one in the Champions League in the reverse game at Shakhtar.

Jesus said: “I am not happy because Sergio is injured. I don’t like it when my friends are injured but I work hard every day and I am ready to play.” The 22-year-old admitted being unhappy at not always starting. “It is not easy as I am a guy who wants to play and improve my football,” he said.

Guardiola often praises Jesus’s ability to press from the front and the player agrees this is his best attribute. “Since I start to play football I am like this. I cannot stop because that is my game. I am a person who likes to run and help my teammates.

“When I decide to come to City I know it is going to be hard because we have Sergio who is the top scorer of the club and he scores every game. I know this but I think I have a chance to play with Pep, with top players and for a great club. So that is why I come – to enjoy and learn. I learned a lot from Sergio. He is a great guy and top player.”

Agüero’s absence is an additional problem for Guardiola, who is without Aymeric Laporte and Leroy Sané owing to long-term injuries. “It’s the toughest period coming now – November, December, January and February. It is what it is,” the manager said: “I’d prefer to have everyone but my advice to the players and myself is not to think too much, see which players we have, what we have to do.

“ We have enough good players, enough quality and our mentality is going to give us extra.”

City have two Group C games remaining and need a point to progress to the knockout stage. “The position we have is good. We have 10 points but we are not qualified,” Guardiola said. “I know Shakhtar and Zagreb can win both games and we will be out. We have the chance to close the group stage. We know Shakhtar quite well and they know us. We are going to prepare well.”

Guardiola’s assistant manager, Mikel Arteta, is understood to be a potential replacement for Unai Emery at Arsenal. Asked about the possibility that his right-hand man could leave, Guardiola said: “I’d like him to stay with us as much as possible. Not for Pep – for Manchester City.

“But personal life is personal life and professional desire is for professionals and everyone. Not just me – everyone is more than satisfied to have him here but what happens at the end of the season I don’t know.” – Guardian