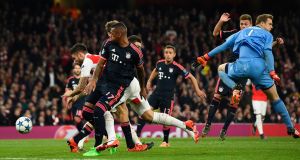 After all the post-mortems, the punishing headlines and the scrutiny that has fallen on Arsene Wenger, Arsenal are suddenly alive again in Europe. Wenger would contest they always were but they were a team in need of resuscitation until the late goals here from Olivier Giroud and Mesut Ozil, and when the opposition are as refined as Bayern Munich this was the kind of result that offers great hope they can save themselves.

Arsenal’s extraordinary sequence of reaching the knock-out stages in each of the last 15 seasons was straying dangerously close to being discontinued before Giroud, fresh off the substitutes’ bench, made the most of a rare mistake from Manuel Neuer to change the complexion of this match.

Bayern’s goalkeeper had produced one save earlier in the match that will linger in the memory because of its uncommon quality but he will be aghast when he sees the replay of how he missed Santi Cazorla’s 77th-minute free-kick. The ball dropped behind him, with the final touch possibly coming off Giroud’s hand, and that was the moment when Arsenal finally had take-off in Group F.

Until that point Bayern had been so superior during the second half it was threatening to become another ordeal for Wenger’s men. Yet Petr Cech was superb, not least with his save to deny Robert Lewandowski shortly before the opening goal, and Bayern were ragged by the time Ozil soothed any lingering nerves with the second goal in stoppage time. Arsenal, with their first points, can now go to the Allianz Arena on 4 November in a better frame of mind.

Bayern’s fans were so aggrieved by the GBP64 admission fee they choreographed a protest, holding up banners and not taking their seats until five minutes into the match, earning sympathetic applause from the home crowd. They did not miss a great deal in the opening exchanges, even if Lewandowski had a chance inside the first minute, but when the game settled down there were intermittent reminders during the first half of why Bayern had won a dozen games in a row, with 40 goals scored and only five conceded.

Guardiola was still missing the twin threat of Arjen Robben and Franck Ribery but Douglas Costa was a frequent menace for Hector Bellerin during those moments. One darting run and a sublime piece of trickery left Arsenal’s right-back resembling a training-ground cone. Soon afterwards Costa took on Bellerin for a second time and was away again.

Yet the outstanding moment of the half came from the man in Bayern’s goal. Arsenal had held their own and, after 34 minutes, Nacho Monreal advanced from the left-back position. Theo Walcott was unmarked, six yards out, and though heading is not his forte he was close enough to goal with enough pace on the cross that if he made a decent connection a breakthrough seemed inevitable. The save from Manuel Neuer was of such rare quality it reiterated why he is recognised as the finest goalkeeper in the world. Sprawling to his left, Neuer actually reached the ball when it was slightly behind him, clawing it out of the air with his left hand and even making sure to scoop the ball wide of the goal so there was no easy follow-up. Aaron Ramsey turned the loose ball wide and, as the stadium shrieked in disbelief, Neuer could be seen punching the air in celebration.

Arsenal could still be encouraged by these moments and the frequency with which Walcott was finding space in attacking areas. Alexis Sanchez had already shot over the crossbar after the ball spun to him from a corner but there were also chances for Bayern when Petr Cech had to rescue his team. Cech turned away Arturo Vidal’s volley and shortly before half-time his fingertips flicked Costa’s rising shot out for a corner.

Bayern were elegant in possession and their midfield trio of Xabi Alonso, Thiago Alcantara and Vidal started to operate with a greater sense of control in the second half. Costa shimmered dangerously, aiming one shot narrowly over the crossbar, and soon afterwards Cech had to be alert to turn away Lewandowski’s angled drive.

For the first time Arsenal were struggling to get the ball. They were left with scraps, hoping to break on the counter-attack, and the growing sense of foreboding was not helped by the sight of Aaron Ramsey being forced off with a recurrence of his hamstring injury after 57 minutes. Ramsey was limping heavily as he was replaced by Alex Oxlade-Chamberlain and faces another considerable layoff.

Arsenal had lost their momentum, dropping further back and defending in great numbers. Oxlade-Chamberlain’s night began by putting what should have been a routine pass straight out of play and there was a nervousness about Wenger’s team during this spell that had not been evident earlier in the match.

Neuer’s misjudgment changed everything. Giroud was superb in his brief time on the pitch and the game ended with Bellerin dispossessing Thiago and crossing for Ozil to score, the assistant referee behind the goal ruling the ball was just over the line when Neuer pushed it away.