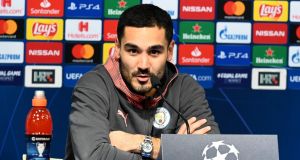 Manchester City midfielder Ilkay Gundogan: ‘If you are successful and have won so many things sometimes you lose focus.’ Photograph: Denis Lovrovic/AFP via Getty Images

Ilkay Gündogan has said Manchester City’s slump is down to a loss of focus and confidence. They have won two of their past seven matches, with the 2-1 defeat by Manchester United leaving them third in the Premier League and 14 points behind Liverpool.

With the centre-back John Stones out for several weeks because of a hamstring problem, the prospects of a third consecutive title look remote. Gündogan, speaking before Wednesday’s Champions League game at Dinamo Zagreb, offered an honest assessment as to why. “If you are successful and have won so many things sometimes you lose focus,” the midfielder said.

“There’s a lack of confidence and you recognise you didn’t play as well as you can. But this is not the way you want to end up – you want to improve again. It’s now our challenge to bounce back. After two great seasons it’s even tougher to do three titles in a row. It’s normal to have this period but the only way is to stick together.

“Every player has to take responsibility to reach his best level again. The sooner we can do that the sooner we’ll be successful again. We are strong mentally and we should be able to do our best. We start from zero against Dinamo, we have to prove ourselves, put in a good performance.”

City have qualified as group winners and Pep Guardiola will use the match as an opportunity to give Phil Foden only his fourth start of the season. The manager believes the 19-year-old can become as pivotal for City as David Silva, who leaves in the summer.

“That is our wish,” Guardiola said. “David is a legend – the amount of games and titles – but it’s our wish and we believe Phil can do it. Like David he is skilled in small spaces. Phil has pace and rhythm at 19 and he is also box to box like an English midfield player. He only needs minutes and when he has them he’ll get what he needs.

“He’s growing from last season. There are still some departments in which he can improve. Sometimes he has to think a bit more about decision making especially without the ball. It’s normal with his age and his development is perfect.”