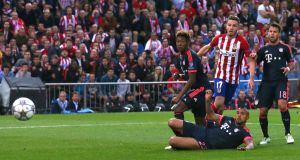 Now that we are all living in a Leicester City world, it is hard to watch the Champions League without wondering how its snazziest participants will cope with Claudio Ranieri’s legionnaires next season. The English champions-elect will do alright if the recent experience of Atlético Madrid is anything to go by. And Pep Guardiola will be relishing facing Leicester in the Premier League next season about as much as he is looking forward to going head to head with Diego Simeone when Bayern Munich try to overturn the 1-0 deficit in next week’s second leg.

Atlético and Leicester are obviously not identical (the Spanish side are a more advanced model, being technically more nifty even if Riyad Mahrez is capable of producing a marvel in the fashion of Saúl Ñíguez against Bayern) but the teams do have startling similarities.

Both yield heroic performances from players cut adrift by more vaunted clubs (how Chelsea could have done with Filipe Luís this season, how Manchester City could have done with Stefan Savic in the sort of form he showed last night, and what were Chelsea thinking of when they sold that sprightly young marauder Fernando Torr… yeah, well, some things just can’t be explained); both teams play in burbling cauldrons that stir the players; both teams can counter-attack with incisive speed; and, most of all, both teams play all over with a finely-channelled ferocity that, for opponents, feels like a 90-minute frenzy.

Whether it is José María Giménez or Wes Morgan, Gabi or N’Golo Kanté, both teams are full of players who, by the way they hurl themselves in front of balls and charge around, exude a spirit that suggests they would happily warm-up by running a marathon if their managers asked them to, but only if it took in the Pamplona bull run.

The most vexing, possibly even perplexing thing for Guardiola as he contemplates Atlético’s first-leg win may be that it was more a triumph of the will than of tactics. Of course players’ positioning and movement mattered – Bayern seemed taken aback by Atlético’s advanced pressing in the first half, which was quite different to how they had nullified Barcelona’s hallowed attacking trinity and indicated that Diego Simeone had seen how Roger Schmidt’s Bayer Leverkusen shut down Bayern in February. But what was most decisive was Atlético’s superior sharpness.

Arturo Vidal’s ordeal in Madrid encapsulated Bayern’s difficulties. It was particularly interesting to see how he reacted to being ambushed in the 66th minute. After a first half in which he struggled to make an impact – though not as sadly as Xabi Alonso – a ball broke to him at the edge of Atlético’s penalty area and he sensed a chance to make his presence felt at last. But as he tried to swivel and shoot, he was engulfed by three home players. The hosts tore forward and Vidal looked not merely confused but emasculated.

The next two times he got the ball he was in relatively abundant space but, still frazzled, passed straight to Antoine Griezmann. His next contribution was to irritate Manuel Neuer by donking the ball out of play for a corner when under no pressure. The Chilean could have had the final say when the ball rolled to him at the edge of the box in stoppage time but, grappling for composure, he essayed a delicate sidefooter and caught the ball all wrong. He groaned as it bobbled into the hands of Jan Oblak.

Kingsley Coman and Douglas Costa were the principal sources of danger for Bayern as Atlético, like Leicester, forced their opponents out wide, but neither winger could find enough sangfroid amid a flame-hot battle to deliver precise crosses. But it was the extent to which Vidal was rattled that bore most powerful testament to Atlético’s ability to unsettle even the most self-assured opponents.

No manager is as self-assured as Guardiola. Except Sam Allardyce but we don’t need to factor him in just yet. Thomas Müller, a Big Bang of a player in so far as he can create space where there is none, might have made more of a difference last night if he had been introduced earlier. But what must most exercise Guardiola’s mind before the second leg is the knowledge that when they came closest to scoring in the first leg it was from a 40-yard shot by David Alaba and a pair of Robert Huth-esque headers, one by Javi Martínez from a corner and another when Mehdi Benatia bounded forward late on.

In other words, when Atlético were nearly unhinged, it was not through intricacy or grand design but through desire, sharpness and power. Even the most gifted teams have to match Atléticos, and Leicesters, if they are to beat them.