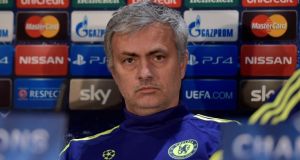 ahead of Chelsea’s confrontation tonight with Roberto Di Matteo. The current Chelsea manager suggested that a better gauge of achievement was building a consistently successful team.

Mourinho has twice won the trophy – the first time was with Porto in Schalke’s Veltins-Arena a decade ago – but it was Di Matteo who secured Chelsea’s only European Cup, in 2012 in Munich. The team included a number of the present squad: Petr Cech, Didier Drogba, Mikel John Obi and Gary Cahill all played at the Allianz Arena, with Branislav Ivanovic, John Terry and Ramires suspended. Chelsea, who finished sixth in the Premier League that season, won on penalties.

“So the Champions League is not something where you can say: ‘This is the direction I want to go because I’ve won that competition.’ A knockout competition is something that always has a big percentage of unpredictability. I can do nothing to guarantee winning it. I can only work to improve my team all the time, make a very good team, like we are doing.”

“Don’t ask me to speak about him,” he said. “History is history. He was on the Chelsea bench when they won the Champions League, so his is an historic name at this club. My name is also in the history of this club. A club is made of many names, not one or two or one player or one manager. I made my history here and now I have the chance to make more history here, and he was Chelsea manager and he did his history here.

“Now we have two matches but it would be better for us to qualify here. We have so many matches in December – if we can avoid a crucial match and that pressure, it would be very good. The reality is we need points. This team is one in a state of evolution and going into the Europa League would be very bad. A team gets better and evolution is faster when they play in the best competition against the best teams.” Guardian Service