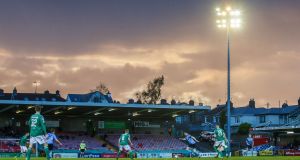 Cork City’s Turner’s Cross home has a capacity of around 7,000. Photograph: Oisín Keniry/Inpho

Cork City hope to be in a position over the next day or so to confirm that any home leg of a Europa League qualifier against Rangers would go ahead at Turners Cross after the competition’s second round draw threw up the possibility of the two sides meeting in a few weeks’ time.

Rangers have not met Irish opponents in a Uefa competition since 1998 when they beat Shelbourne 7-3 on aggregate but with the Dublin club’s home leg having been moved to Tranmere’s Prenton Park on that occasion, it is 1984 since they played in Ireland.

3 Fintan O’Toole: We had zero Covid and we blew it

7 ‘We should have done better’: Cillian de Gascun, Paul Reid and Stephen Donnelly look back

8 David McWilliams: Why Ireland will recover faster than others

10 Wood burning stoves: The inconvenient truth about the homely heater

19 Michael Walker: Why Marcelo Bielsa is manager of the season so far

23 Jennifer O’Connell: The Government doesn’t trust us and it’s mutual

26 Paul Flynn: Three satisfyingly simple dishes that anyone can cook

29 Covid-19: Self-isolation rules to be eased for healthcare workers

30 Blackrock cottage beside a babbling brook and parkland for €725k

36 Divers steal beer being aged by sunken ship off Argentina