Chelsea peg Atlético back but Roma emerge top of the pile 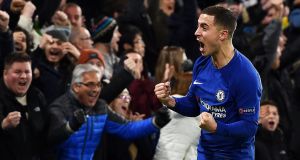 The Europa League awaits Diego Simeone and his side, victors in the semis here three years ago and the beaten finalists in 2014 and 2016 having huffed and puffed through this group to little real effect. In a way, this display rather summed up their Champions League campaign. They led and allowed hope to flare for a while but, in reality, their lead on the night always felt flimsy and, regardless, Roma were busy making it irrelevant in the night’s other Group C fixture. While Chelsea can still thrill at the prospect of the draw to come, Diego Costa, the man who wanted out, will return in Uefa’s secondary competition in the new year. That will feel rather inadequate.

The onus had always been on Atlético to force the pace in a contest they had to claim to stand any chance of extending their involvement in this competition into the new year. Simeone’s side may not have lost since their defeat by Chelsea at the Estadio Metropolitano, but they have drawn too many matches in the period since with their inexplicable stalemates home and away against Qarabag, the group’s whipping boys, having inflicted real damage on their ambitions. Simeone’s histrionics on the touchline, all anguished complaints and livid remonstrations with officials and players alike, betrayed the significance of the fixture. Yet, once Atlético’s initial urgency petered out without reward, the tension rather enveloped them.

Their best early opportunity had fallen to Fernando Torres, once Chelsea’s record signing and a European Cup winner from his otherwise relatively underwhelming spell in south-west London. The striker, granted a healthy round of applause by the home fans on his first return to the club, spun in a congested penalty area early on and fired in a shot which deflected up and over the bar off César Azpilicueta. Simeone must have anticipated that opportunity being the prelude to his team imposing themselves on the hosts, and the chance to expose Davide Zappacosta, an uncomfortably make-shift left wing-back. Yet the onslaught fizzled out and, by the interval, Atlético’s anxiety was heightened.

Chelsea had come closest to forcing themselves ahead, Zappacosta allowed to cut infield by Thomas Partey before forcing Jan Oblak into a low save at his near post and Tiemoué Bakayoko steering a shot wide from Cesc Fàbregas’ fine cut-back. Álvaro Morata was a constant threat, collecting Andreas Christensen’s accurately slide-ruled pass, via Eden Hazard’s dummy, to curl just wide of the upright, and then forcing Oblak into a smart save from Victor Moses’s centre. The Spaniard had been excellent against Atlético in September’s meeting between the sides and, once again, benefited from Hazard’s scuttling brilliance. Atlético, with Lucas Hernández and Stefan Savic overworked, fretted over news from Rome.

While that game remained goalless the Atlético clung to hope of a miracle of sorts – particularly as Oblak thwarted headers from Christensen and Morata – but only if the visitors roused themselves in the same way they had from a poor opening in that semi-final second leg in this venue in 2014. Antoine Griezmann, so quiet throughout that drab first-half offering, did curl a free-kick straight at Thibaut Courtois to suggest their intent had been restored by Simeone’s half-time observations, though there was an irony that the his side only really injected conviction into their play just as Diego Perotti was putting Roma ahead in the Stadio Olimpico.

Filipe Luís, another former Chelsea player, had emerged from the home side’s concerted pressure to belt a left-footed shot on to the post from distance, with Courtois doing well to spring up, dive and claim Koke’s diving header from the rebound. Regardless, the home side were picked apart within minutes. Koke’s corner was flicked on by Torres, who had peeled away from the clutter in the six-yard box, with the ball looping over the muddle for Saúl Ñíguez, escaping Bakayoko’s attentions at the far post, to nod unchallenged into the net. The midfielder celebrated with gusto in front of the away support in the Shed end, with Torres’ contribution his last before he was replaced by Yannick Carrasco, yet all actually depended on the Azerbaijan club somehow rallying in Italy.

Chelsea, in contrast, were stung into a response. Christensen should probably have converted Fàbregas’ pull-back only to nod wide of a gaping goal. Unperturbed, Moses wriggled forward, twisting away from Filipe Luís and Lucas, with the substitute Pedro flicking goalwards and José Giménez and Oblak thwarting Morata’s attempt to stab in the loose ball on the goal-line. As it was Atlético, would eventually be breached by one of their own. Hazard, granted too much time on the edge of the box from Fàbregas’ deep centre, drilled a cross shot low which Savic inadvertently deflected beyond Oblak.

The goalkeeper was crestfallen, albeit he recovered splendidly to deny Morata as Chelsea pushed ever more frantically for a winner. Willian should have provided it, only to slice horribly high and wide with Atlético almost resigned to their fate.

1 Inside the world’s largest sports air dome just outside Knock
2 ‘Embarrassment, anger, sadness’: the decline of the great Stephen Hendry
3 Worst sporting moment: White knuckle ride on a hate-filled night at Windsor
4 As ever, Ronnie O’Sullivan sparks debate at the Crucible
5 Shane Lowry has work to do to make FedEx Cup playoffs after 70
Real news has value SUBSCRIBE