PSG expect to take another step towards their European goal 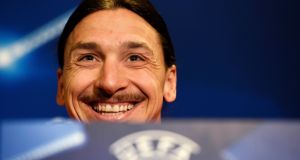 Chelsea’s Champions League knockout stage adventures have rarely been anything less than gruelling.

From the cod-ideological struggles with Barcelona of the Mourinho and post-Mourinho team, to the recent bruising defeats by Atletico Madrid and Paris Saint-Germain, it has often been tortuous viewing, even for the neutral.

Until now, that is. Perhaps the most striking part of the build-up to the second leg of the last-16 tie against PSG is a certain lightness in the air. For once the pressure really does lie elsewhere.

Chelsea’s season has been listing comfortably for the last two months, a soft-touch salvage operation under emergency commander Hiddink.

Whereas for PSG the picture is a little different. These knock-out games are still defining encounters in the early years of what both Zlatan Ibrahimovic and Laurent Blanc referred to repeatedly as “the project”.

“With time, with what the Qataris are investing in this, they will hunt down this Champions League, with or without me,?” Ibrahimovic said last night, while Blanc sat poker-faced beside him.

Zlatan may be pre-demob-happy, a superstar who can see the exit door ajar in the distance. But these are significant moments for PSG.

Elimination at the hands of a team who could well be absent from European competition next year could be a defining failure not just for the ageing core of this Mk1 project team, but for their manager too.

As Hiddink said later, twisting the knife very gently: “Of course Chelsea were anxious also to win the European Cup once. And PSG is the same now. I hope we can stop them a bit in their, what do you say, project.”

It was a note struck also by Gary Cahill. “Yeah, it’s a big week for the club,” he shrugged. “Top players tend to enjoy playing in big games. Intense pressure brings out good performances.”

“Hiddink has brought a calmness around the place, a nice atmosphere where the pressure’s on when it has to be on, and the pressure’s off when we work on the training ground. For this game, it’s both things.

“We know how important the game is. But, you know, this evening when we’re together, we’re just calm and relaxed.”

The first leg of this tie was the first time Chelsea have played an Abramovich-era Champions League match without one of John Terry, Petr Cech, Frank Lampard and Didier Drogba in the squad.

Terry will be missing again at Stamford Bridge, a blow given the likelihood of deep concentrated periods of defence and the fact that Ibrahimovic has never scored a goal when Terry has been on the pitch.

Not that Chelsea are quite the underdogs Hiddink may like to suggest. A 1-0 victory, another nerve-shredding night of deep defence with Mikel Jon Obi and Nemanja Matic an unprepossessing double midfield bolt might look the most likely means of progress.

But Chelsea’s attacking combinations have been good in recent weeks and Hiddink will be conscious of playing to his opponents’ weaknesses, too.

A more belligerent approach might have its merits against a PSG side used to having it easy in Ligue 1 with seven league goals conceded away from home all season, territory and possession dominated each week. Chelsea might be best served trying to take their opponents out of this comfort zone. When they did get forward in Paris they had some joy pulling David Luiz and Thiago Silva around and probing behind the 34-year-old Maxwell.

Since the game in Paris, PSG have lost at Lyon and drew 0-0 with Montpellier at the weekend, a misleading result as Blanc took the opportunity to rest Ibrahimovic and Thiago Motta and gave Angel Di Maria just an hour on the pitch.

“Everyone is waiting for that game,” Blanc admitted afterwards, of a second leg that could even turn out to be a tipping point in his own time in charge in Paris.

Marco Veratti’s boldness in possession will be missed. And as ever for PSG, much will depend on the team’s ability to play through and around their 34-year-old totem, brand-leader and all-round charisma magnet Ibrahimovic.

For Chelsea, released from the weight of expectation, a fast start may be key. Guardian Service