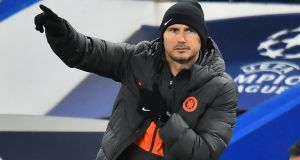 For Frank Lampard, it was not an occasion to fret about permutations. Chelsea did not have to worry about what was happening between Ajax and Valencia in Amsterdam and, after a series of wild encounters in this evenly matched group, they welcomed the rarity of a European night free of anything resembling dramatic tension – at least until Lille belatedly stirred and spent the final 10 minutes threatening to grab the equaliser that would have dumped Lampard’s side into the Europa League.

The focus will turn to whether Chelsea possesses the talent to make an impact in the knockout stages. In that regard the doubters will linger on the way the game became frantic and chaotic after Loïc Rémy halved the deficit deep into a sleepy second half.

Stamford Bridge was a nervy place as the final whistle approached and Chelsea were relieved they had made the most of Lille’s lethargy during the first half. While they held on, Lampard will be all too aware that Europe’s elite will be primed to feast on his team’s defensive frailties in the last 16.

Chelsea were in control of a one-sided contest before Rémy’s intervention. Their destiny was in their hands and they refused to let go, dominating from the start and progressing at the expense of Ajax thanks to Tammy Abraham’s poaching instincts and an excellent display from Christian Pulisic, who is starting to shoulder the burden of that £58m fee with increasing nonchalance. They wrapped up the win during a rampant first half and ensured Lampard need not have worried about whether they were capable of performing under pressure.

The manager was full of nervous energy at the start, rushing to gather the ball after it went out for a Lille throw and it was clear he wanted his team to work up an early frenzy. This was as much a test of Chelsea’s mental strength as it was of their technical ability and Lampard had challenged his players, saying it was a night to demonstrate how much success means to them. There had to be a reaction after Saturday’s messy 3-1 defeat at Everton and Chelsea fizzed with intent, hunting down the loose balls, clattering into the 50-50s and chasing the opening goal with sharp, intense football.

The tone was set by Pulisic flying in to charge down a clearance by Zeki Celik inside the first minute. Jorginho could soon be seen snapping in to win possession in midfield and Lampard must have been delighted with Chelsea’s start. Pulisic, Emerson Palmieri and N’Golo Kanté went close and Lille were already clinging on by the time Abraham, keen to dispel the idea he shrinks in the big games, broke the deadlock with his 13th goal of the season.

It was a fine goal, with the danger sparked by the slippery Pulisic. The American winger was driving at defenders relentlessly and excitement built when he set off on another speedy run. The ball was shuffled to Willian, who tore clear on the right and the his low cross was flicked home by Abraham from close range.

A sense of contentment fell over Stamford Bridge. Lille were already out and their priorities lay elsewhere. They made seven changes to the side who beat Brest 1-0 last Friday and left their leading scorer, Victor Osimhen, on the bench. Rémy, the former Chelsea striker, was up front instead and there was little to concern Lampard during the opening period. Rüdiger could not have asked for a gentler workout on his return from injury, so much so he took it upon himself to inject some intensity into proceedings, crunching into a thunderous challenge on Rémy on the edge of the area.

Lille’s second string were not up to much and Chelsea moved clear with a straightforward goal 10 minutes before half-time. Emerson whipped in a corner from the right and César Azpilicueta rose unchallenged at the near post to head past Mike Maignan.

Lampard had gone with experience, replacing Mason Mount and Reece James with Jorginho and Emerson, but there was nothing tired about Chelsea’s football. They continued to press at the start of the second half and Maignan, who had required treatment after colliding with Kurt Zouma just before half-time, had to be alert to save fierce efforts from Pulisic and Willian.

It seemed Chelsea had finished the job. Lampard withdrew Abraham and Pulisic, with Mount and Michy Batshuayi on in their place but Lille pulled a goal back out of nothing when Jonathan Bamba, on as a substitute, laid the ball back for Rémy to crash an emphatic finish in off the bar.

Rémy’s goal changed the mood. Chelsea grew jittery and they were relieved when Yusuf Yazici drilled a shot wide from the edge of the area. They remained too open and qualification was only secured when Rémy shot straight at Kepa Arrizabalaga in injury time.

1 Ashleigh Barty now living up to all her earlier promise
2 Mourinho insists there is no problem between him and Danny Rose
3 Felix Jones expects De Allende and Snyman to boost Munster
4 Gerry Thornley: Saracens very late to apologise for repeated cheating
5 Donegal’s Yvonne Bonner very much up for Down Under
Real news has value SUBSCRIBE