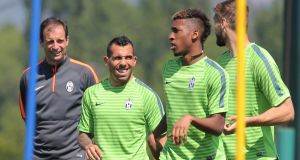 Gianluigi Buffon believes progress beyond Monaco into the semi-finals would re-establish Juventus “among the best teams in Europe” as the Italian club seek to end their country’s recent toils in the competition.

No Serie A side has reached the last four of the European Cup since Jose Mourinho’s Internazionale hoisted the trophy five years ago, with Juve, who travelled to the principality boasting a 1-0 lead from last week’s first leg, having not forced passage into the semi-finals for 12 years. Massimiliano Allegri’s team expect a stern test against the side who eliminated Arsenal in the last round, with the need to qualify and restore the club back among the elite not lost on their experienced goalkeeper as he enters the latter stages of his career.

“This is a big game for me but above all for the players and the club as a whole,” said Buffon, a runner-up in the 2003 final against Milan when Italy had supplied three of the four semi-finalists. “Personally, I’ve never won this competition and I’d like to do that as soon as possible. But, more importantly, it’s a chance to show we’re back among the best teams in Europe, that Juventus are on the way back up in terms of European football. We can send out a significant message to the rest of Europe by reaching the semi-finals, and we would be proud to achieve that.”

Juve are well clear at the top of Serie A, which they lead by 15 points from Lazio, who they beat 2-0 on Saturday, and will compete with the Rome club in the Coppa Italia final in June.

“This is an important evening for our whole season,” said Allegri, who will have his goalscorer from the first leg, Arturo Vidal, available after he recovered from a bout of tonsillitis. “But we only have a slim advantage and we will need to score in Monaco to progress. We know their threat and they’re a team who are strong physically and technically, so they will test us, Guardian Service