Brendan Rodgers: No complacency as Celtic travel to Astana 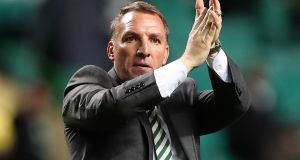 Manager Brendan Rodgers claims complacency is not an issue as Celtic prepare to defend their healthy 5-0 Champions League play-off lead in Astana.

The Hoops took a huge step towards guaranteeing their place in the group stages for the second successive season under the Northern Irish boss following a first-leg thrashing of the Kazakhstan club at Parkhead last week.

Rodgers will assess Nir Bitton, who has had a protective boot over his foot injury over the last few days — but he is more certain about his side’s ability to stay focused in the Astana Arena on Tuesday.

“In every single game we play we are always relaxed but focused and there is no change in this game,” he said. “We are never complacent, we never take anything for granted and that is a daily part of our life. “When you play for a huge club like Celtic every day you have to prove yourself and in every game, so there is no question of being too complacent.

“My players will be relaxed but always with a focus. We worked very well in the first leg but we need to complete the job tomorrow. The first leg is gone, it’s in the past.

“This is a game that you just can’t just discard. We had a great result in the first game but we had to work very hard and it will be equally that tomorrow.”

Since a 7-0 defeat against Barcelona at the Nou Camp in September 2016, the Scottish treble-winners have not lost on their European travels against Borussia Monchengladbach, Manchester City, Linfield and Rosenborg.

Moreover, the Scottish champions have not conceded in five European ties this season and Rodgers is keen to keep those records intact. The former Swansea and Liverpool boss said: “We have a good record since the Barcelona game away from home in Europe so we are looking to add to that.

“We had a good performance against Monchengladbach, drew and should have won the game.

“Manchester City we had a good result and drew and against Rosenborg we won 1-0 so we are growing and developing at this level and we hope we can continue to do that tomorrow.

“So we think of it as 0-0. We are strong in every game we play and we always pick a team to get the best result we can. Thus far we haven’t conceded a goal in the qualification phase...in our competitive games we have conceded one goal so far.

“It is a good effort by the players and it epitomises the organisation in the team.

“A lot of focus is on the creativity and style with which the team plays but we have a philosophy in terms of our defensive organisation which is also equal to our attacking idea.

“We take great pride in how we defend, how we press, the togetherness and cohesion in the team because it is all related.