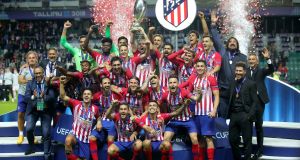 Quick-fire goals from Saul Niguez and Koke gave Atletico a 4-2 win in Estonia in Real’s first competitive match since club record goalscorer Ronaldo was allowed to join Juventus for €112 million.

Diego Costa’s two goals, either side of Karim Benzema’s header and a penalty from Sergio Ramos, ensured it finished level after 90 minutes to force extra time at the A. Le Coq Arena in Tallinn.

With the LaLiga season set to start at the weekend, playing 120 minutes in a venue located more than 2,400 miles from the Spanish capital was not ideal for either club.

Real’s new manager Julen Lopetegui endured a nightmare start as the European champions fell behind inside a minute to a superb individual goal from Costa.

The Spain striker chased his own flick on following Diego Godin’s ball forward, held off the challenges of Ramos and Raphael Varane and then smashed the ball past Keylor Navas at the near post from a tight angle.

Goalkeeper Navas should have done better and he probably would not have started the match had new £31.5million signing Thibaut Courtois, who was watching from the stands, been registered to play.

Having not signed a replacement for Ronaldo, coach Lopetegui opted to select Gareth Bale in a three-pronged attack with Benzema and Marco Asensio.

Bale, who scored the match-winning goals in May’s Champions League final as a substitute, created the leveller in the 27th minute.

The Wales forward burst down the right past Lucas Hernandez and delivered a perfect cross for Benzema to head past Jan Oblak at the far post.

Atletico coach Diego Simeone was forced to watch from the stands while serving the third match of a four-game touchline ban after insulting a match official during last season’s Europa League semi-final against Arsenal.

Defender Juanfran, under pressure from Benzema, was penalised for handball by Polish referee Szymon Marciniak and captain Ramos coolly converted the resultant spot-kick, rolling the ball into the bottom right corner and sending Oblak the wrong way.

Atletico had never previously beaten their city rivals in a final but they responded with an equaliser 11 minutes from time.

Juanfran atoned for his earlier error by playing in Griezmann’s replacement Angel Correa and the substitute cut the ball back for Costa to tap home.

Saul Niguez put Atletico back in front eight minutes into the additional period, smashing a volley into the top right corner following a cross from substitute Thomas Partey.

Real never conceded four goals in a match under Lopetegui’s predecessor Zinedine Zidane and were aiming to win the trophy for the third successive season.

But any hopes of a fightback were extinguished in the 104th minute when midfielder Koke slotted home for the Europa League holders to give Simeone his seventh trophy as Atletico manager.

1 Rory McIlroy puts integrity ahead of glory in US PGA second round
2 From Maestro to Mister: Andrea Pirlo named new Juventus boss
3 Frustration for Lowry and McIlroy as Li leads at US PGA
4 Buttler and Woakes drag England from the brink to set up thrilling Pakistan win
5 Serena Williams ready for a socially distanced US Open
Real news has value SUBSCRIBE