Atlético Madrid hero Fernando Torres will have to be patient 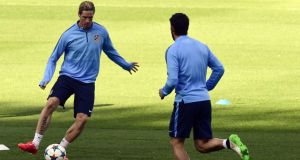 Torres made his debut in the Second Division at 17, an idol for supporters who sang his name to the tune of Can’t Take My Eyes Off You – he was described by one columnist as “one part prodigy, one part folk hero, one part native son, one part messiah” – and he played for Atlético for seven years, helping them return to the First Division, but he did not win anything and was never close. He recently revealed that Atlético’s fans encouraged him to leave, for his own sake.When he did depart he had never beaten Real Madrid. Not once. And then, seven-and-a-half years later, he returned.

Things are different now. Torres returned to Atlético a world and European champion, via Liverpool, London and Milan. In the meantime, under Simeone, the man he had watched that winter’s afternoon and then later captained, Atlético had started winning too. They’d beaten Real for the first time in 14 years and 25 matches to win the Copa del Rey at the Santiago Bernabéu and had taken the league title, 18 years on. “The club has changed completely,” Torres said when he came back to the place he described as his “only home”. He was about to experience first hand just how much.

Atlético were knocked out that night, losing 2-3, but when Real Madrid next visited in the league Torres crossed for Mario Mandzukic to score the fourth in a 4-0 win, their biggest derby victory in 64 years and their first home league win against Real in 17 seasons. As for Torres, he had gone from no wins in seven years to three in less than a month. Not a bad way to come home.

And yet Torres’s figures since returning are fairly modest: he has four goals and in the league has scored as many in his own goal as in the oppositions’ goal, with one in 12 league games. He has none in two Champions League games, one assist in the league, none in Europe. That third goal for Atlético, against Barcelona in the cup, had come from his third shot. Away at Sevilla he was superb, away at Málaga last weekend he was poor , but his performances have been steady rather than spectacular.

Star of the forward line

Mandzukic will start tonight, according to Simeone. Torres will wait for his chance. Guardian Service

Jota forgets penalty miss to steer Liverpool past West Ham 20:08
Dean George bags a hat-trick as Athlone stun Shels 19:27
England lay down marker for Ireland after bonus point win in Rome 19:09
Dublin return from the dead to give Kilkenny a scare in Croke Park thriller 18:57
James McClean nets for Stoke as they beat Rotherham 18:35