Atlético call on Saúl to dispatch Bayern in first leg 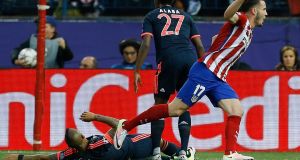 The road to Milan must go via Munich yet, but it was Atlético who emerged from Madrid in the lead, the scarves stretched across the stands at the Vicente Calderón as the club’s anthem rang out. A truly wonderful goal puts them in a position to complete achieve a truly wonderful achievement.

Diego Simeone’s team are 90 minutes from a second European Cup final in three years, only the third in their history. The first was against Bayern Munich in 1974, when a 120th-minute equaliser from Hans-Georg Schwarzenbeck denied them the trophy. They hadn’t met since. Now, they have and there may be more drama ahead but at the end of the first leg the advantage is Atlético’s.

It had been since the eleventh minute, when Saúl Niguez scored a magnificent goal that would prove to be the winner. The ball dropped from high, inside the centre circle where Saúl, standing alone, brought it down first time, killing first and breathing life into it next. He began a meandering run rightwards seemingly going nowhere in particular and followed loosely by Thiago. Suddenly, he shifted gear and direction, turning towards goal, still forty yards out. Thiago was left behind; now Xabi Alonso came towards him from one side, Juan Bernat from the other. Right foot, left foot, and Saúl was through them like a slalom skier through a gate.

Into the area, David Alaba to a step his way but, shifting his weight once more, Saúl opened up his body and curled the ball into the far corner. The moment was Maradona-esque, one of the great goals this competition has seen, scored by a 21-year-old. The Calderón erupted, already shaky foundations weakened a little more. Atlético had the lead; Bayern were stunned and overrun. Ten minutes had gone but Atlético had already taken four shots; this was Saúl’s second; Torres also had two. The pressure was applied high and at speed.

The game had begun and it was some game; players seemed to be running at each other all over the pitch, the game direct and the pace breathtaking at times. Bayern pushed, Douglas Costa determined to take on his man every time he could. Jan Oblak had to punch away from Arturo Vidal and was then almost caught out by Costa’s clever shot towards the near post. Just before the half hour, Thiago found Lahm, who cut inside and took aim from just outside the area. The shot hit Augusto by the elbow, arms shooting up appealing for a penalty. From an Atlético free-kick, Costa and Kingsley Coman broke at speed up the left, but the pull back was poor.

Bayern played more passes, Atlético covered more ground. The stats said as much and so did the sensations. The sensation when Atlético headed forward was one of danger; more so than when Pep Guardiola’s side did. Whenever Bayern lost it, they immediately found Atlético run right back at them. Filipe Luís dashed up the left, Fernando Torres sprinted onto balls over the top, and as for Saúl, well, he seemed to be everywhere.

One run over the top saw Antoine Griezmann get all the way to the edge of the six-yard box only for his poked shot, under pressure from Javi Martínez, to be stopped by Manuel Neuer’s leg. Fifteen minutes later, on the other side of the six yard box it was Koke who had the chance, flicking his shot into the side-netting. It was Saúl who had made it.

The first half had ended with a long period of Bayern passing, played out to a soundtrack of whistled, before a wild shot flew over; the second began with the Germans pushing Atlético ever further back. Soon it seemed like the ball was permanently flying across the Atlético area. Alaba’s 35-yard shot thundered off the bar,Oblak dived to save Martínez’s header off the line, José María Giménez slid in to make a sharp block, Coman’s cross flashed across the six yard box.

And so it proved. Costa’s attempted lob drifted over as he progressed on the right and then Vidal struck, hard, from twenty-five yards. Oblak dived to save. But Atlético had found their feet again, beginning to manage this game a little better, to have a little more say in the flow of it. Or, where possible, the lack of flow. They were more comfortable than before now; they were also almost 2-0 up when, with fifteen minutes to go, Griezmann led a break and found Fernando Torres, who cut inside and curled a shot with the outside of his foot against the post. Neuer saved Koke’s follow-up.

The pace and the flow was slipping from this game, chances fewer now, but there was no let up in the noise. When substitute Mehdi Benatia’s header was held by Oblak in the last minute there was a roar; when the goalkeeper stopped Vidal’s effort a moment later, there was another. And when the final whistle seconds after that, there was a third and the singing started. It still hasn’t stopped.