Bayer Leverkusen, CSKA Moscow and BATE Borisov will join them in the draw 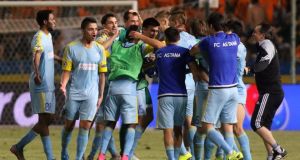 A late Nemanja Maksimovic equaliser was enough to see FC Astana into the Champions League group stages - becoming the first ever team from Kazakhstan to do so.

Going into the tie 1-0 up from the first leg, Semir Stilic cancelled out that lead with a 60th minute strike.

However, Maksimovic managed to find the net with six minutes to go to see the Kazakhstani team into Thursday afternoon’s group stage draw.

Meanwhile, there was major drama in Moscow as CSKA scored three second half goals to come from behind and send Sporting Lisbon crashing out of the tournament.

After losing 2-1 in Portugal things looked to be going Lisbon’s way when a Teofilo Gutierrez goal put them ahead shortly before half-time.

However, a Seydou Doumbia brace saw the game heading for extra-time before Ahmed Musa netted with five minutes to go to send the Russian team into the group stages.

It was a night of drama in the playoffs and the tie between Partizan Belgrade and BATE Borisov was no different.

After conquering Dundalk in the previous round BATE went into tonight’s game on the back of a 1-0 home win.

The doubled that lead with a vital away goal from Igor Stasevich after 25 minutes.

Partizan fought back late on Maksim Zhavnerchik own goal and a Ivan Saponjic strike got them back on level terms but it was a case of too little, too late as BATE scrambled through on away goals.

It was less of a struggle for Bayer Leverkusen as goals from Hakan Calhanoglu, Admir Mehmedi and Karim Bellarabi saw them cruise by Lazio, winning 3-1 on aggregate.