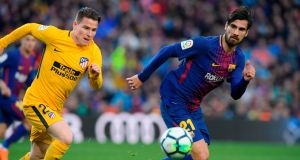 Ernesto Valverde is considering including André Gomes against Chelsea despite the midfielder publicly admitting he is not enjoying playing football and is struggling with the pressure at the club.

The Barcelona manager described Gomes as “brave” for speaking out, and the midfielder Sergio Busquets said the squad would help their team-mate after Gomes gave an interview to Panenka magazine in which he described his “hell” at Barcelona. “Andre has lots of qualities; let’s see if tomorrow is the day that he shows that,” Valverde said.

“I don’t feel good on the pitch,” Gomes said in the interview, which was conducted at the end of February and published on Monday. “I am not enjoying what I am doing. The first six months were pretty good but then things changed. Maybe it’s not the right word to use, but it has turned into a kind of hell, because I have started to feel more pressure. With [some] pressure, I feel fine, but with the pressure [I put] on myself, I don’t. The feeling that I have during games is bad.”

“On more than one occasion, I didn’t want to leave my house because [of the way] people look at you,” he added. “You have a fear of going on the street out of embarrassment. I close myself off. I don’t talk to anybody. Thinking too much has hurt me. I think about the bad things and what I have to do. My team-mates help me a lot but things don’t work out the way they want them to work out. In training, I am generally relaxed although there can be days when I feel a little low on confidence and it’s noticeable.”

During the recent visit of Atlético Madrid, Valverde could be seen swearing about the murmuring that went around the stadium when Gomes had the ball. The player’s revelations put that footage into context and occupied much of the build-up to the second leg against Chelsea. Asked if Gomes was ready to play, Valverde replied: “If the coach believes so, yes.”

Gomes’s inclusion may depend on a straight choice between him and Paulinho, and could also be conditioned by the fitness of Andrés Iniesta, who was able to train after a week out with a hamstring strain.

“Players and coaches are [generally] careful not to show any insecurity or weakness and André has done so, which is brave, but it is not new and he is not the only one – it has happened to us all in one way or another and we have to find ways of confronting that and carrying on,” Valverde added. “This is not something I have not come across before in my career, as a player or a coach.”

Busquets said: “We knew something of André’s situation but it’s a very personal thing. We have tried to help him, advise him, be at his side, but he is the one that takes it home. The background noise at the Camp Nou should be positive now. I think he’s ready. It’s an extra pressure he puts on himself but I am sure he’s prepared and we will help him from the inside, and the fans will help him from the outside. What we all want is what’s best for the club.” – Guardian