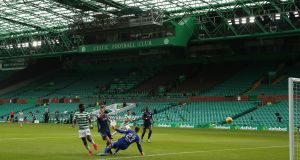 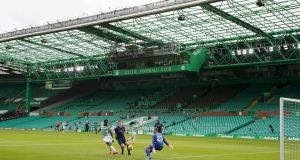 It is highly doubtful any transfer interest in Odsonne Édouard would be stoked by a hat-trick against Hamilton Academical. Necessary context is applied by balance sheets; his salary of around £30,000 per week is more than Hamilton’s entire wage spend over the same period.

Still, it cannot be denied that Édouard’s prominence over the opening weeks of this new Scottish Premiership season will at the very least increase speculation of the former Paris St Germain player being coaxed towards bigger things.

The 22-year-old has pace, graceful while effective movement and can finish. Celtic should enjoy him while they can; Brendan Rodgers, who managed Édouard during his time in Glasgow, is among those with an ongoing interest in the striker’s development. It is to Celtic’s credit they have developed a reputation for cashing in on high-value players. Inevitably, at some point, Édouard will follow the path of Moussa Dembele and Kieran Tierney.

Celtic’s pursuit of a 10th title in succession doesn’t necessarily require Édouard’s involvement but Neil Lennon would clearly rather retain the services of Scotland’s finest player. The heavy impact of Covid-19 on Celtic’s finances, Champions League aspirations, unorthodox transfer window dates plus a hefty sell-on clause as retained by PSG are not insignificant subplots. So, too, whether or not Édouard is of a mind to chase history in Scotland or believes he is worthy of sterner tests after three years in green and white. This showing at least demonstrated his focus remains intact.

“He is a special talent,” Lennon said. “He has started the season brilliantly. He has so much to his game and what’s pleased me over the last 12-15 months is the number of goals he is scoring. Really important goals, different types of goals.

“We don’t want him to go anywhere. He would be the first one to say today was about a team effort but he produced three real striker’s goals. Today was about winning. Winning and winning well. We’ve done both. Considering it’s the first game in four or five months, it’s a brilliant return.”

Lennon suggested it is “pivotal” Édouard remains in place, a message which will not be ignored by the Celtic board. He stole the show as a vibrant Celtic disproved any theory that playing at home minus 60,000 supporters would have a detrimental impact.

Hamilton have no cause to be dismayed about their performance – during the first half in particular they traded blows with the champions – but ultimately a massive gulf in class showed. Celtic started the afternoon unveiling the league flag from title number nine in a row; by close of play they had simply endorsed their status as firm favourites for a perfect 10. Celtic had 25 shots and enjoyed 80 per cent of possession. The more things change, etc.

Hamilton’s early flirtations with the home goal meant a smart Scott Bain save from Andrew Winter and a David Moyo header which flashed just wide. Celtic responded with a fine, sweeping move, which finished with Greg Taylor’s cross being flicked home by Édouard. Taylor was again the supplier for number two, Jeremie Frimpong this time stealing in at the back post to score. Celtic’s style is such that Frimpong and Taylor can profit as auxiliary attacking players domestically. Both enjoyed fine afternoons here, with the Hamilton defence regularly penetrated from deep.

Scott Martin’s twice-deflected shot gave the visitors hope of an unlikely turnaround, but it was extinguished within eight minutes of the second half getting underway. Édouard converted a James Forrest cross, having carefully remained onside, before latching on to Ryan Fulton’s save of a Ryan Christie drive to complete his hat-trick. Patryk Klimala, introduced in place of Édouard in the closing minutes, scored his first competitive goal with an angled shot after Christopher Jullien set him up with an excellent long-range pass.

“I am disappointed to lose five goals, but Hamilton will not be judged on games against Celtic,” the Hamilton manager, Brian Rice, said. As is perfectly correct. Celtic don’t want or need a new normal. Continuing their dominance over Scotland will suit Lennon perfectly well. If Édouard fancies remaining a part of that, all the better for Celtic. – Guardian

1 Ken Early: PSG would be sensible final move for Ronaldo
2 The Offload: Joe Schmidt the influencer is due a second act
3 A new breed of superstar - Collin Morikawa wins US PGA
4 Ronnie O’Sullivan: snooker’s next generation are ‘so bad’
5 Champions League quarter-finals: game by game verdicts
Real news has value SUBSCRIBE
Crossword Get access to over 6,000 interactive crosswords