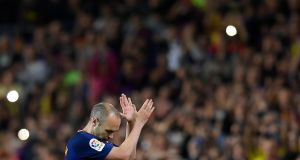 Rarely has a draw felt so good to this stadium. Barcelona are three games away from completing an unbeaten season after this draw with Real Madrid with 10 men. Twice Barcelona led, twice Madrid equalised, but El Clásico finished 2-2 and with the Camp Nou chanting “Champions!”.

A game that was supposed to be decaffeinated, nothing riding on it, Barcelona champions already, was instead among the most tense and controversial in recent memory, with eight yellow cards, one red card, four goals, countless confrontations and tension all the way to the end.

Barcelona led early. Luis Suárez, back to goal and receiving on the halfway line, turned the ball sharply first time into the run of Sergi Roberto, dashing into the space behind Marcelo and bending a superb ball towards the far post. There, Suárez was steaming in to guide the volley past Keylor Navas for his sixth Clásico goal – more than anyone else since his arrival in 2014 – and setting off in search of his seventh.

Soon after he tumbled under a challenge from Navas, but it was Real who were about to take control. Toni Kroos, free of Sergio Busquets and running at the Barcelona defence, combined with Ronaldo and clipped the ball to the far post where Karim Benzema nodded it back and the Portuguese forced it over the line. Only 15 minutes had gone and more goals might have swiftly followed. Ronaldo headed over; next he was blocked by Marc-Andre Ter Stegen; and then, played in by Kroos, struck hard and low just beyond the far post. All that in just three minutes.

At the other end, Messi provided two wonderful deliveries, both of which ended with volleys going over the bar, first from Jordi Alba, then from Samuel Umtiti, but Barcelona were uncomfortable. Madrid took control, not allowing their opponents out. Ronaldo headed on to the roof of the net and Benzema bent a shot wide.

The tension was rising, too. Alba and Modric squared up, as did Suárez and Sergio Ramos, and Messi was booked for a foul on the Madrid captain. Gareth Bale escaped the same fate for a dreadful challenge on Alba. And just before half-time, Sergi Roberto was sent off for lashing out after Marcelo bumped into him.

Barça’s task appeared to be just to hang on, but it did not turn out that way. Marco Asensio, on for Ronaldo, who had twisted his ankle, was sent racing through but couldn’t find the finish, and a minute later Barcelona were back in the lead. Luis Suárez scrambled away from Raphaël Varane, who he seemed to trip as he went past. With Varane down, Suárez found Messi in the area, who escaped Ramos and curled a perfect finish into the bottom corner.

Suárez thought he had made it three soon after, but the flag was up, and then Paulinho almost reached Nélson Semedo’s ball across the six-yard box. As Madrid pushed, Suárez sent Messi dashing through, but Navas made a superb save. That might have been it, but Madrid struck back immediately, Bale providing a superb finish to Marco Asensio’s pass, bent beautifully into the net.

With 15 minutes remaining, Marcelo went flying in the Barcelona area. The drama of the fall may have disguised the fact that Alba’s boot made contact with his shin, and the home side escaped this time, but they still had to hold on, their with energy levels dropping. Modric hit over, and the hosts might have taken the lead for a third time when Messi dropped a lovely shot just wide and then drew a save from Navas at the near post. Instead, they had to resist, their grip slipping with each second, but ultimately they held on.