Barcelona in the eye of the storm as Catalan crisis deepens

Clashes have broken out as thousands of people poured into the streets of Barcelona to show their anger after Spain's Supreme Court jailed nine Catalan separatist leaders to between nine and 13 years each. Video: Reuters 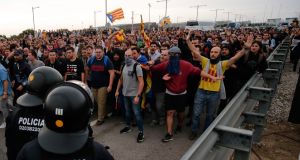 There was a conspicuous casualty amidst the chaos at Barcelona’s international airport on Monday afternoon, following Spain’s Supreme Court ruling that nine Catalan separatist leaders were to receive prison terms of between nine and 13 years. The out-of-sorts traveller was Ivan Rakitic, Barcelona’s midfield football star.

Having played in a Euro 2020 qualifier for his country Croatia against Wales in Cardiff on Sunday night – which finished in a 1-1 draw – Rakitic flew back to Barcelona the following day, little realising that the airport would become engulfed in clashes between riot police, using gas and baton charges, and protestors flinging rocks and cans and spraying fire extinguishers.

Road access to and from the airport was blocked by protestors. Over 100 flights were cancelled. Marooned at the airport because he couldn’t get a taxi, Rakitic was flummoxed.

“The road is blocked. What am I going to do?” he reportedly said while phoning someone at the airport on his mobile phone, according to El País.

Rakitic – who is one of Barça’s most decorated players and scorer of the first goal in its last Uefa Champions League final triumph against Juventus in 2015 – had no choice but to set off on foot. Later he was pictured walking along the hard shoulder of a busy bypass, dragging a travel bag with wheels behind him as well as a couple of shopping bags and a small rucksack strapped across his shoulders.

On Tuesday morning’s edition of Mundo Deportivo, which is one of two Catalan daily sports newspapers, its cartoonist KAP couldn’t help making fun of his plight, sketching Rakitic striding along the motorway muttering to himself that he hoped Barça’s coach Ernesto Valverde “recognises this walk for a training session!”

Manchester City’s coach Pep Guardiola had no time for humour on Monday. He wore a pained expression in the short video he simultaneously released to Catalonia’s public broadcaster TV3, BBC and AFP, denouncing the Supreme Court ruling as an affront to human rights and lamenting Spain’s “drift towards authoritarianism”.

Guardiola is from Santpedor, a small sleepy town an hour from Barcelona city, the kind of rural hinterland where a majority tend to support Catalan independence compared to minority support in the Barcelona metropolis. He has long been a poster boy for Catalan separatism, which has led to criticism.

Despite captaining Barcelona during the 1990s as a player and leading the team to 14 trophies in four seasons as a coach, Guardiola is not universally admired by Barça’s supporters because of his strident political stance.

Not all of Barcelona’s fans are separatists. Many of them have a dual sense of identity, feeling Spanish yet also being proud of their Catalan language and culture.

In March 2018, England’s Football Association fined Guardiola £20,000 for wearing a yellow ribbon on his lapel during Man City’s matches. The yellow ribbon is the symbol for solidarity with Catalonia’s political prisoners you find scrawled on pavements and hanging from balconies throughout the region in Spain’s north-east corner.

People wonder how Guardiola can reconcile his defence of human rights and freedom of speech in Catalonia with Abu Dhabi’s poor human rights record, a country which is ruled by Mansour bin Zayed Al Nahyan, Man City’s owner, and his family. When questioned about his double standards in press conferences, Guardiola fudges, suggesting that “every country decides the way they want to live for themselves”.

On Monday, Ines Arrimadas, who is probably the most prominent pro-Spain politician in Catalonia and a Barça fan, scolded Guardiola on Twitter for his latest protest video.

“I admired Guardiola as a player and a trainer,” she wrote – having admitted previously in an interview that she used to have photos of Guardiola on her folder as a school girl – “but I must condemn his lies as ‘political’. [He’] very brave slandering Spain but not one word about Qatar where he makes money,” she wrote, alluding to Guardiola’s paid role as an ambassador for the Qatar 2022 Fifa World Cup.

Gerard Piqué, who has won three Uefa Champions League titles at the heart of Barça’s defence and has admitted he’d like to be president of the club one day, is more nuanced than Guardiola in his support of Catalan independence. He has always stressed that he’s in favour of a referendum, but he never specifies whether he’s a separatist or not.

On Monday, Piqué tweeted in English that he was “Proud to be part of this Club”, as FC Barcelona released a strongly worded statement – by the standards of the current administration – maintaining that “prison is not the solution” to the Catalan political crisis that is bedevilling Spain. Other Barça players like Sergi Roberto and former icon Xavi Hernández also issued supporting messages online.

The Catalan Football Federation announced a suspension of all football games in Catalonia on Monday in response to the unrest.

As it happens, Barcelona’s next home game at the Camp Nou stadium is against their eternal rival Real Madrid, a sporting institution that has long been recognised as an emblem of Spain’s establishment and is always awash with Spain flags whenever Real Madrid plays their clásico match in Madrid.

For the game in Barcelona on Saturday week, all the eyes of the football world will be on the Camp Nou where Barça’s fans traditionally chant for “independence” at 17 minutes, 14 seconds into the game, in a nod to the year “1714” when Catalonia first lost its independence to a Madrid-based court.