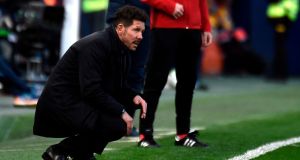 And so it ends? If, that is, it hadn’t already – and if it ever really started. “I feel like I lost it,” Diego Simeone said. It was Sunday evening on the east coast and he meant the game, but in all probability it was the title too.

Defeated 2-1 by Villarreal, at the final whistle Atlético Madrid’s manager gazed at nothing in particular, an empty look on his face as all around him people celebrated. An old man enthusiastically shook the hand of the man next to him, a solitary square of yellow confetti settled on his tweed hat, while Simeone’s team trudged past towards the tunnel.

Vitolo had led the way seconds before, sent off for the first time, and now they followed, knowing that, barring a miracle, the league had just come to a close at the Ceramic Stadium, two months early.

“Is it over?” Simeone was asked afterwards, to which he said something about winning lots of games and seeing where they are with five weeks to go. But with nine weeks left, Atlético are probably too far off and he could have been forgiven for offering a shorter, simpler answer: “probably.” On Sunday afternoon, Barcelona defeated Athletic Bilbao 2-0 and that, plus Atlético’s defeat, leaves Simeone’s side 11 points and head-to-head goal difference behind the leaders.

“It’s finished!” ran the shout on the radio and most agreed: any small, lingering hope Atlético had of becoming champions again, already radically reduced since that loss at the Camp Nou a fortnight ago, slipped through their fingers.

“There’s no explanation,” Saúl said. “It was strange; this doesn’t happen often.” He was right, it doesn’t. Ever. Not even against Villarreal, the team Atlético hadn’t beaten in four. At half-time, Atlético were 1-0 up, Villarreal’s president Fernando Roig going down to tell the referee he’d got it wrong when he gave diving Antoine Griezmann an early penalty. Thirty-five times Simeone’s side have led 1-0 at half time, and they’d never lost. With 10 minutes to go, they were still a goal up. Atlético were relentlessly atléticoing again, in control and on course for a ninth 1-0 of the season, a 19th clean sheet. To make sure, Greizmann came off and Gabi went on. A minute later, Enes Unal made it 1-1. Eight minutes after that, with virtually the last kick of the game, Unal scored again, his sixth of the season – five for Villarreal, one for Levante.

No wonder Simeone was blaming himself. “I lost it: the players made a huge effort and I didn’t help them,” he said. “It’s not his fault,” insisted Saúl, but there was something in Simeone’s confession. “Unal punishes el Cholo,” ran the headline in AS. In the match report below, Patricia Cazón was reeling off Clint Eastwood’s films, linking them to key moments of a game which she said had had started on the porch, rifle in hand like Grand Torino; in which Griezmann’s penalty had been shot like Dirty Harry; the match became a fight and the pitch a ring, Million Dollar Baby-style; and in which there was, of course, the good, the bad and ultimately the ugly too. One film she didn’t mention was Never say Goodbye, and Simeone wasn’t saying that but they surely know they may soon have to and everyone else was doing it for them. Three pages on, Picu Díaz insisted: “defeat meant bidding adiós to the league.”

“Atlético say goodbye. If it looked impossible before, that’s a reality now,” agreed El País. “The final lights out – the remote chance they had disintegrated at the Cerámica,” said El Mundo. When Messi had scored against Athletic a few hours earlier, he had done a dance. Well, a momentary wriggle, anyway – and that was enough. “The rhythm of a champion,” cheered El Mundo Deportivo. “This league is a dance,” said the cover of Sport. “It’s official: no one can keep up with Barcelona’s pace: the league is on a plate,” read the editorial. They said Barcelona can “smell” the league, which poses the question “what does the league smell of?” and sets you up to insert your own “fishy” here. The front cover of AS, meanwhile, went for: “the league, done.”

Well, part of the cover did – in small letters near the top. The big letters were reserved for Cristiano Ronaldo. He had just scored four against Girona – as many as he got in the whole of the first half of the season – to take him to 22 this term, having got 18 in his last nine league games. Oh, and those goals against PSG too. “What’s unusual is that he was not scoring before,” Nacho said but he is now. Ronaldo’s 2018 has been absurdly impressive. At one point, he was 17-4 down on Leo Messi when it came to league goals; now the ‘score’ is 25-22. “POKER, and only three from Messi,” shouted the front of AS. “He’s got 22 in the league, had left Luis Suárez behind (21) and is going for the Pichichi.” Marca’s cover led on: “INCREDIBLE!”, noting: “He’s got 22 and is only three from Messi.” Underneath it said: “Madrid, four points off Atlético.” There was no mention of the 15 points they are off Barcelona. Or the 11 points Atlético are off Barcelona.

In part, the decision to lead with the top scorer award was rooted in the fact that they had already given up on the league itself. Back in November, when he had just one goal, 11 fewer than Messi, Marca reported that Ronaldo had bet his team-mates that he would still finish as ‘Pichichi’. There was no suggestion that he had bet that they would win the title. Perhaps even as early as then there was a feeling that it was already gone, that it slipped away when the team wasn’t functioning and Ronaldo, like others, wasn’t scoring. What they’re doing now is a lot, but it is also late.

Titles are won in the final weeks, they say – but that’s only true if you’re still in touch and Madrid lost touch some time ago. They dropped points in three of their first five games and in nine of their first 19. They lost the clásico, then returned from Christmas to draw 2-2 with Celta and lose to Villarreal. Almost from the start, few hopes have been deposited in them. If anyone was going to compete for the title, it was Valencia, and then Atlético. Now they too have fallen away. Was this Atletico’s final slip? If the league hadn’t gone before, most think it has now.

“Hay Liga!” the phrase goes when the race is on. There is league. This morning there is not. Maybe there hasn’t been for a long time. “It’s just a countdown now,” Santi Giménez wrote in AS. Barcelona would have to lose at least four in nine to lose the title. Their run-in is quite difficult – they go to Celta and Sevilla and have to play Madrid, Valencia and Villarreal at home – but few imagine that an unbeaten team will lose four times. “Barcelona games have all the emotion and uncertainty of the Russian elections,” wrote Emilia Landaluce in El Mundo. “They have the predictable ending of a fourth-rate porno,” she added, suggesting that she either doesn’t watch Barcelona or has very niche taste in films.

One thing is true, though: Barcelona keep on going. Twenty-nine games in, they’re still unbeaten; the rest are not given a chance to catch up. They’re afforded but a brief moment. Down to five points, Atlético drawing near, Barcelona’s lead is now back up to 11. They’re still there, where they always were.

This has been the season where nothing much has changed, and no one has really moved. There are still 10 weeks to go of course, but until now might-be hasn’t become actually-is; every time it has appeared open, the door has closed. The top four have been the top four since week seven and the top six have been the same since week 10. They have been divided into the same two groups as well, Champions League places on one hand, Europa league places on the other (although it is likely that seventh will provide access to Europe too), and then there’s relegation.

At the bottom, only Alavés have broken the pattern, pulling out of the relegation zone, embarking upon an extraordinary run to salvation. Fifteen weeks without a win saw Levante dragged towards trouble, but they’ve now won two in a row under new manager Paco López and, following a huge 2-1 win over Eibar, there are six points between them and the relegation zone, leaving the same old faces in the same old places. Las Palmas and Deportivo played each other this weekend, desperately needing a win. Neither got it, which somehow summed it up. So here we are, another Monday, another week closer to the end, and the same table. Go back and you can see it.

Five weeks before that

And five weeks before that

In short, this season in Spain the same nine teams have occupied the same decisive spots for the last 11 weeks. Barcelona have occupied the most important place of all and they have done so from the start to the finish, which almost certainly arrived on Sunday night, nine weeks early.