Arsenal lucky to escape with a draw against Standard Liège 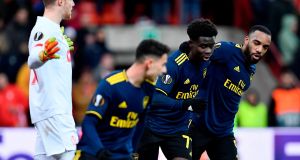 If Arsenal could translate their spells of distilled attacking brilliance into anything approaching a full performance, this could yet be some team.

They swamped West Ham with three goals in nine minutes on Monday and here they were lucky to escape with a draw against Standard Liège, eventually thanking Bukayo Saka, the 18-year-old wide player, for superbly assisting Alexandre Lacazette and then scoring a fine equaliser. The goals came within 180 seconds of each other late in the second half, cancelling out deflected strikes from Samuel Bastien and Selim Amallah. With a considerable slice of help from Guimarães, who won dramatically against Eintracht Frankfurt, they ensured Arsenal finish top of Group F and it means they will avoid potentially awkward encounters with Internazionale or Ajax, among others, in the last 32.

From the beginning it was clear that this would be a character-building test for Freddie Ljungberg’s team, composed largely of fringe players. Standard, defeated 4-0 in the reverse fixture, are a different proposition at home and had their own designs on progress. Three points and a failure for Eintracht would send them through and the home fans, massed in steep, severe stands behind either goal, did their best to create the kind of environment that might cow the less experienced among the visitors’ ranks.

The bitter cold and harsh wind in a partly open-cornered venue contributed to that too, along with a patchy, bobbly playing surface that demanded every pass to be played with added care. So it was no surprise that what followed was scruffy and low on quality.

Neither team found it easy to retain possession for long but, when Arsenal did, they created the moments best approximating to excitement. The first, in the 14th minute, saw Emile Smith Rowe lose his man cleverly after taking Lacazette’s slick pass, surging into the space he had created and, from an angle on the right, forcing Arnaud Bodart to divert the ball wide with a toe.

The home keeper made a similar stop from Saka before the half-hour mark after a patient buildup on the other flank and, as the interval neared, parried again from the Arsenal left wing-back before diving on to Reiss Nelson’s follow-up header. Saka had been deployed in that position, in which Ljungberg has previously deployed him for the club’s under-23s, as one of nine changes from the side that beat West Ham.

Another of Ljungberg’s switches saw Konstantinos Mavropanos given his first senior action of the season and it was from the Greek centre-back’s mistake that Mehdi Carcela shot straight at Emiliano Martínez in the home side’s most dangerous moment of the half.

Mavropanos had been trying to play out from the back and, in so doing, appeared to catch the same bug that has infected his colleagues at various points in the season. These were hardly conditions conducive to precision football and that was perfectly evident in the performance of Standard, who were brisk and willing but short on real menace. Their only other real moment of first-half threat saw Sokratis Papastathopoulos act more decisively than his compatriot had, blocking from Renaud Emond, the rangy centre-forward, after he had found a good shooting position.

Standard had, in short, not looked like scoring but they changed the game’s complexion within two minutes of the second half. Bastien was subjected to little pressure as he advanced to the right of central midfield and, from 22 yards, decided to try his luck. His meaty strike did not look especially harmful until it took a hefty ricochet off Papastathopoulos, which removed much of its sting but sent the ball spinning agonisingly beyond Martínez, who had already committed and could not quite adjust to the change of direction in time.

The celebrations were lusty but in practice the goal altered little for Standard. Eintracht’s short-lived lead over Guimarães meant their hopes of going through were fading. The combination of the two scorelines gave Arsenal a headache, though. They did not manage much in the way of an instant response, instead finding themselves caught ahead of the ball several times on the break and counting themselves fortunate that Standard lacked the quality to work a killer opening.

A determined run to the byline by Smith Rowe, who showed some fine touches throughout, brought no reward and the second goal that had been vaguely threatened came shortly afterwards. It owed to more sloppy work inside their own box, Joe Willock this time presenting the ball straight to Amallah. Once again a defection did the work, a snick off the unwitting Mavropanos beating Martínez.

Arsenal’s non-display since re-emerging had got what it deserved at that point. But their capacity to perplex knows no bounds. When Lacazette headed in Saka’s excellent cross from point blank range, in their first really threatening moment of the half, their tails instantly went up. It took only another three minutes for Saka, manoeuvring across the box before whipping a right-footed effort across Bodart, to restore respectability. News of Guimarães’s lead buoyed Arsenal and brought loud exhortations from the Standard support, but in the end Ljungberg’s team were the ones departing in satisfaction.

1 Health official says decision to hold Liverpool-Atlético game was wrong
2 BBC to draw from well of nostalgia during barren months
3 Son Heung-min to carry out mandatory national service in South Korea
4 Avoid the treadmill at all costs – marathon training in the 2km radius
5 Cheltenham's horsey set unmoved by some poxy little global pandemic
Real news has value SUBSCRIBE
Crossword Get access to over 6,000 interactive crosswords