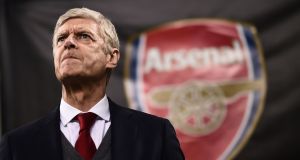 Arsenal manager Arsene Wenger will know that the Europa League is his team’s best chance at qualifying for next year’s Champions League. Photograph: Getty Images

If he needed a little inspiration in these challenging times then Arsène Wenger needed to look no further on Tuesday night than Old Trafford and the meeting between Manchester United and Sevilla.

Two clubs who have between them capitalised three times in as many seasons on the changed rule that gives the winners of the Europa League a coveted spot in the following season’s Champions League group stages.

Wenger’s team selection for the win over Watford confirmed his previous suggestion that he sees qualification for the game’s great cash cow via the league as being beyond his side at this stage. United found themselves in the similar situation last season, albeit a few weeks further on into the campaign, when José Mourinho made major changes for the visit to Emirates, a game that fell between the two legs of their semi-final against Celta Vigo.

The Frenchman still sees himself as the man to get Arsenal back on the track but it might well be that his ability to deliver the Europa League now goes a very long way towards deciding whether he will be given more time to reverse Arsenal’s slide in what in a more competitive landscape at the top end of the Premier League.

His track record at the club has earned him the gratitude of the owners although it is doubtless the regularity with which he has delivered a place in the Champions League that matters more at this stage than the fading memory of the titles during his first decade at the helm. Certainly it is not the three recent FA Cup successes.

Of the English clubs, only Manchester City have earned more from the Europe’s premium competition over the last five years with the Londoners having grossed €213 million; €64.6 million of it last year and €53.4 million the year before.

The money is huge with related commercial and matchday revenues adding to the equation and yet the importance of participation in the competition goes well beyond it, everyone knows, with player recruitment and the expansion of a team’s fanbase in overseas markets amongst the many factors that are closely linked.

Such has been the reordering of things in recent years by Uefa, however, that an English team missing out might not actually be too badly out of pocket if they actually win the Europa League.

Arsenal have so far guaranteed themselves a mere €3.5 million in actual prize money from this year’s competition but that most starkly performance related element of the payday is heavily weighted towards the tail-end of the tournament while the distribution of the TV pool guarantees a Premier League outfit, especially when its rivals have gone out early, a disproportionate slice of the pie.

Winning the competition last year Manchester United was, on the face of it, worth fractionally over £40 million to the club, some £10 million more than their group stage exit from the Champions League and subsequent round of 16 EL defeat by Liverpool the previous season. That gap, though, would have been significantly smaller but for the decline in sterling’s value against the Euro.

The situation is complicated, meanwhile, by all the related contractual clauses, with the bulk of United’s players, for instance getting paid around 25 per cent less in a season in which the club is not in the Champions League (the difference was reported to be €28 million last year and would have been more this year as the biggest earners would have affected) while the deal with Adidas would have had a third (roughly €25 million) knocked off its value had Mourinho’s side failed to make it for a second consecutive season.

Liverpool, in any case, got €37.8 million for making the final a couple of seasons ago and the hit Arsenal take will not be quite so hard to endure if it proves to be a one off.

Sevilla, provided something of an example of this front, using the money earned through winning the competition in successive seasons off the back of fifth place finishes in order to secure a return to the Champions League via a place in La Liga’s top four, effectively the only one up for grabs these days in Spain, last season.

With its best players routinely picked up by bigger rivals, though, the Spaniards have struggled to maintain the improvement and currently lie fifth in the table, 11 points behind Valencia and so, unless they somehow manage to win the Champions League this season, something that looks highly unlikely given their actual quality, they will be back to trying to qualify through the back door.

United have no such worries with their place at the top table already pretty much secure for next season. As Wenger tries to book his own side’s return to the Champions League, though, Mourinho’s predicament might just have a familiar feel about it.

Arsenal should build on the defeat of Milan to progress and will believe that, if the sorts of performances produced last week by the likes of Henrikh Mhhitaryan, Mesut Özil, Laurent Koscielny and Aaron Ramsey can be reproduced, they can go on to win the tournament although the concern remains that, on their day, the Londoners could still contrive to lose to almost anyone left in their path.

Mourinho’s side seem to have a touch of that about them too these days and look to have fallen so far behind City at this stage that nailing down their place in the following year’s Champions League looks to be about the height of it right now with both of the major trophies a club like United actually aspires to winning apparently well beyond them.

That’s territory Wenger inhabited for quite a few seasons. He has survived the situation this long in part because, it seems, the owners were happy to see the club’s financial position strengthened, the fans felt the owners bore some of the responsibility for the failure to spend at the level required and, through it all, the generally likeable Frenchman at least aspired to playing the sort of football that most supporters would ideally like to see their sides play.

Not much of it of that applies in the case of United; certainly not the last bit and Manchester City set to rub their rivals’ nose in it during the coming weeks, Mourinho is unlikely to be given anywhere as much time or as many chances as Wenger has received these past few seasons to deliver on expectations.