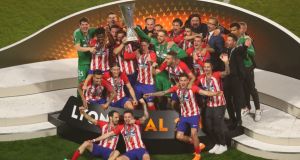 Another success for Diego Simeone and Atlético Madrid, and another success for Spain in the Europa League. Eight of the last nine winners of European competitions have been Spanish – and Real Madrid could made it nine out of 10 in Kyiv next week. La Liga, meanwhile, has provided nine winners of the Europa League in the past 15 years and a third in nine seasons for Atlético, two of them under Simeone – although he was confined to the stands here after he was sent from the touchline during the first leg of the semi-final against Arsenal.

It was not, in truth, a final that will live long in the memory. Atlético played as they tend to at their best, holding their opponents at arm’s length, spoiling when they need to, and winning comfortably without really seeming to extend themselves.

Marseille gifted them the first and were not without blame for the second, while the third was the result of a smart counter against weary opponents, but the first two also involved ruthless finishes from Antoine Griezmann. That the France forward is likely to leave Atlético for Barcelona in the summer perhaps leaves a bittersweet note, but Atlético are familiar enough by now with that reality.

There is much sniffiness about the Europa League but there is a sense in its later stages that it is what the European Cup used to be. These are big clubs but not superclubs, teams crafted through careful work in the transfer market rather than by epic splurges every summer, teams for whom success is not a given, a privilege of rank, but must be scrapped for and is perhaps appreciated rather more as a result.

The Marseille side is a fascinating collection of misfits and malcontents; no fewer than six of their 18-man squad had played in the Premier League and only one of them, Dimitri Payet, was anything like a success.

And let nobody suggest to Marseille fans that the Europa League does not matter. In the stands, their white shirts outnumbered the red and white of Atlético by a factor of around three to one. They were noisy and raucous and, before a kick-off delayed by the overrunning of the pre-match entertainment, set off dozens of red flares, swaddling the arena in a thick gauze of smoke that lingered for most of the first half.

Three of those Marseille misfits combined as early as the fourth minute, Payet playing a one-two with the former Newcastle winger Florian Thauvin before slipping in the former Monaco striker Valère Germain, who blazed over. But that early promise did not last long.

With Germán Burgos, promoted to a starring role because of Simeone’s touchline ban, glowering from the edge of the technical area Atlético slowly squeezed the life out of Marseille. Like Simeone, Burgos is a former Atlético player and, like Simeone, he seems to embody the club’s self-image. He ended his first Madrid derby spattered with blood after saving a Luís Figo penalty with his nose, and was the front man for a rock band called The Garb. In 2003, he was diagnosed with cancer but survived.

A mulleted barrel of a man, he paced back and forth with an oddly lethargic gait, pointing and shrugging, hands flicking from his hips to sweep through his still-lustrous dark hair. The two Marseille wingers were denied any space and, just as vitally, his increasingly frustrated gesticulations got Atlético pressing high enough to disrupt their opponents as they sought to pass out from the back.

That induced the opening goal as Steve Mandanda played an awkward ball to the holding midfielder André-Franck Zambo Anguissa, who miscontrolled. With the two centre-backs split, Gabi could not have had an easier pass to lay in Griezmann for a straightforward finish.

Worse followed for Marseille as they lost Payet to what appeared to be a tweaked groin just after the half-hour. He was in tears as he left the pitch to be replaced by Maxime Lopez and received a consolatory hug and kiss on the cheek from Griezmann, his France team-mate.

There had been little after the early flurry to suggest Marseille could unsettle Atlético, their recent surge of good form that may see them claim third place in Ligue 1 no match for the superior quality of the runners-up in La Liga. That, perhaps, should not be too much of a shock. Atlético may not be a superclub but they exist on the periphery of the elite, the 13th richest club in the world, with annual revenues roughly double those of Marseille.

Any prospect of a comeback diminished sharply four minutes onto the second half as Griezmann ended a bouncing ball infield for Koke, whose return pass found a gaping hole between Adil Rami and Jordan Amavi. Griezmann ran on and deftly clipped his shot over Mandanda.

In an age in which defending has gone out of fashion and it can seem as though no lead is ever truly safe, there is a welcome solidity to Atlético. There was a minor scare as the substitute Kostas Mitroglou headed against the post, but no Simeone side was ever going to give up a two-goal lead. Gabi’s slick third merely confirmed what had long seemed inevitable.

Dundalk remain pointless after losing fifth group game at Molde 22:48
England’s balcony messages ‘100% in spirit of the game’ – Eoin Morgan 22:30
Former Cavan captain confident his county can compete against Dublin 21:31
Fans return as Arsenal win big against Rapid Vienna 22:31
Connacht use visit of Benetton to give as many players as possible match time 20:51