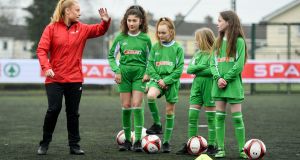 Amber Barrett is targeting a Bundesliga breakthrough over the second half of her first season with FC Köln after what she admits has been a frustratingly slow start to the start of her professional club career.

The 24-year-old Donegalwoman left for Germany last summer with high hopes she would make a major impact last over the course of her first season away but has so far played just 151 minutes of top flight football despite goals having proven to be a major problem for the newly promoted side.

“There was a period before Christmas when I was thinking I could have being getting more of a shout,” admits the Republic of Ireland international whose improvised goal in the European Championship qualifier away to Greece in November kept Vera Pauw’s side firmly in contention for a top two spot.

“We went through a period of not winning any games and yet it was the same starting 11 and he was not making any changes closer to goal, and that frustrated me. But I was being reassured that maybe he (coach Willie Breuer) was giving me more time to settle in.

“Having scored in the Greece game, though, and then that weekend not even getting two minutes; that was hard for me. “

With the team third from bottom, one place above the relegation zone, however, Breuer has now departed, and Barrett, who scored after having come on in what was the Köln’s only win since the opening weekend of the season, is hoping that she will fare better under his replacement, former Frankfurt and SC Sand boss, Sascha Glass.

“Hopefully now it is up for me to impress this new fellow and see how things go. Hopefully it won’t take as long for this guy to give me more game time anyway.”

Barrett, who was speaking at an event to promote Spar’s forthcoming programme of primary school blitzes, insists she has settled well in the city despite not having much of a grasp of the language yet but she is only now getting to the grips with the physical demands of moving from amateur football back in Ireland to the full-time game.

“The body just goes into complete shock. I had been doing a fair bit of work to get myself into shape for going away but you can’t train yourself for the intensity of training, of what you are doing then all the time.”

The challenge, she says, would have been even more daunting had she not had the experience of training with fellow Ireland internationals who had made similar moves to the continent’s elite leagues before her.

Milford-born Barrett, who qualified as a secondary school teacher last year, only gave up playing Gaelic football a couple of years after having been involved with the Donegal panel (her father, Sean Paul, and brother, Luke, are currently managing the county’s under-20 and under-17 men’s teams respectively) and admits that it is one of the many things she misses about home.

But having chosen her sporting code she is determined, she says, to succeed in the professional game.

“Absolutely,” she says. “Look, the first year is probably going to be....not a write off but....I maybe won’t play as much football this season as hopefully I will in the coming season.

“I’ve come from something different and even the players, when they found out that I had come from training twice a week, they couldn’t believe it.

“But I’m quite confident in my ability. I’m a realist and I know that it will take time to adjust but I’ve no doubt that I’m good enough. I’ve (already) scored in the Bundesliga.

“I have two years on my contract,” she continues, “I’m going to go through that and see how things are. So far so good, I’m really enjoying Cologne. I like everything you need.

If (in the longer term) something else, a better offer came from somewhere then obviously you have to look at those things but I think with me, the GAA, sort of stamped into me that loyalty to a club.

“We’ll see but I have no plans at this stage anyway.”

*SPAR5s blitzes are open to boys and girls from 4th, 5th and 6th classes. Schools can register until February 14th at www.fai.ie/primary5