All in the Game: Reguilón has to share out his ham 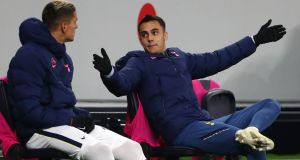 All you can hope is that Sergio Reguilón likes ham. It was back in November that the Spaniard was rewarded by José Mourinho for a nifty performance against Manchester City with a rather enormous £500 leg of Iberico ham which, you’d guess, he had only just digested when he arrived at the club training ground on Christmas morning.

“There was a box in my place,” said the Spaniard. “I open it up and it’s a roast suckling pig, already cooked. He [José] said to me ‘I know you’re alone at Christmas, and this way you don’t have to cook and you’ll eat well.’”

Reguilon was moved by the gesture, as, you’d imagine, were the group of people, including teammates Erik Lamela and Giovani lo Celso, who joined him a lockdown-busting party over Christmas.

“I gave an amazing gift to Reguilón – Portuguese piglet,” said Mourinho. “I was told he would spend Christmas on his own. He was not alone as you could see. We are not happy – it was a negative surprise for us.”

In fairness to Reguilon, though, that roast suckling pig was probably a negative surprise too, there’s only so much ham a man can eat.

While Pelé graciously congratulated Lionel Messi when the latter passed his record just before Christmas for the most goals scored by a player for a single club (the Barcelona man reaching the 644 mark against Valladolid) Santos, for whom Pelé is credited with scoring 643 goals, were slower to doff their caps. Why? Because they insist that Pelé actually helped himself to 1,091 goals during his time with them, so Messi still has 447 to go. That’s quite a discrepancy.

Mind you, an eye or two was rolled when the list provided by Santos was seen to include a heap of goals scored in friendlies, or “amiable disputes against fragile opponents”, as their statement so delightfully put it.

Officially, then, the record belongs to Messi, so Budweiser decided to mark this slice of history by sending a gift to every goalkeeper who ever conceded a goal to the little wizard during his Barca reign. The gift? Well, Budweiser, of course. All you can hope is that poor old Diego Alves, the former Valencia goalkeeper, actually likes the tipple. How many bottles did he receive? Twenty-one.

“The new regulations are a problem. I have found three players already who were capable of coming here and they’re not allowed. It’s a shame. That has made life a bit more difficult.” - Brexit-supporting Sam Allardyce on new Brexit regulations making it harder to sign players for his struggling West Brom. Stop chuckling at the back.

“To play in an empty stadium is boring in my opinion. I don’t like it. It’s so weird. I like when people boo Cristiano.” - We’re less than a week in to 2021 and Ronaldo is already referring to himself in the third person. It’s going to be a long year.

“You don’t want to put the TV on, you don’t want to listen to things. I’ve never listened to Radio 4 in my life, but they don’t do any football or sport, so I’m learning so many weird and wonderful things about life now, having been in this bubble of football for 35 years.” - Sheffield United manager Chris Wilder on tuning in to The Archers, Farming Today, Women’s Hour and such like as part of his effort to avoid any coverage of his team’s cataclysmic season thus far.

“It was hard for me - normally I have three weeks off and eat a lot of potato salad in the Czech Republic.” - West Ham’s Tomas Soucek on the potato salad-less hardship of playing through Christmas for the first time in his career.

5: That’s the lowly number of Premier League clubs now solely British-owned (Everton, Newcastle, Spurs, Brighton and West Ham), the purchase of Burnley by an American company bringing to 15 the number that are now wholly or partly foreign-owned.

The very best thing about Thomas Muller is not that he won the World Cup or 627ish Bundesliga titles with Bayern Munich or two Champions Leagues, it’s that he once had a horse called Dave.

Now he has a horse called D’avie who he and his wife Lisa, a champion dressage rider, bought last summer and he is the star of the couple’s latest enterprise: selling horse semen for breeding purposes. Indeed, they are now the owners of an official EU insemination station for dressage horses.

D’avie, whose services are the most expensive on offer at the Gut Wettlekam farm, has been likened by SportsBible to Muller’s Bayern team-mate Robert Lewandowski, presumably because they’re both thoroughbreds, but the Pole might not be overly impressed when he hears you can buy two rounds of D’avie insemination for a mere €1,600 plus vat - as The Sun pointed out, while conceding that comparing dressage with flat racing is not entirely comparing horsey like with like, a donation from the legend that is Galileo will set you back around €600,000.

No matter, Muller is thrilled to have D’avie in his life. “Since his arrival at our farm, he has put a smile on our faces every day,” he said. From here on in, D’avie, you suspect, will have a bit of a smile on his face every day too.