All in the Game: Fenerbahce’s Mesut Özil fundraiser 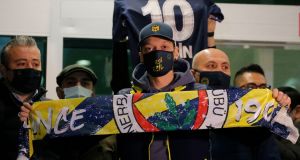 How excited were Fenerbahce fans last week when Mesut Ozil boarded a plane in London to set off for Istanbul to sign for the club? Well, 1,800,000 of them, club president Ali Koc claimed, followed the plane’s progress on various flight-tracking apps - although some cynics claimed 1,700,000 of them were Arsenal fans just wanting to make sure he’d left London.

Koc’s one regret, you’d imagine, is that the club didn’t set up its own flight-tracker for Ozil’s trip and then charged each of the 1,800,000, say, a fiver to use it. Although, he’s come up with a similar enough scheme to help fund the signing of the German.

There’s no transfer fee involved, but between a signing on fee, agents’ bills and Ozil’s €4 million wages up to the end of the 2024 season, it still adds up to a lotta loot. So, Koc has asked “maybe 300,000, 500,000 or maybe even a million” Fenerbahce fans to join a texting campaign where each will contribute €2 towards that bill.

Are they really that hard up? Well, yeah. The latest estimate is that their debts add up to ...... €517million. Strewth.

“Everybody is negative, the whole squad is negative. Bar two players.” Neil Lennon on criticism of Celtic’s recent trip to Dubai, insisting that it resulted in no positive Covid tests (if you don’t count those two lads and their 13 contacts who had to go in to isolation).

The meanest Twitter account? That’d be ‘Days Since A Trophy’ (@_spurstrophies). “Today Joe Biden becomes the 46th POTUS, and the 12th since Spurs last won a league title.”

“I think Liverpool miss me more than I miss them. Jurgen knows this, because we talk. He wrote to me recently: ‘We miss you’.” Dejan Lovren, now at Zenit Saint Petersburg, on how much Jurgen Klopp is pining for him. Jeez, that’s a serious defensive crisis.

“We warm our boots up in what’s like a boot microwave. And because he wears metal studs, they get so hot. So he will always just walk around with them in his hand and just tap them on your skin, on the back of the leg or something.” Mason Mount on picking up first degree burns when Jorginho’s about.

“It’s absolutely disgraceful the question that you’ve given me .... it’s rich for you saying ‘you should be appalled’, because I’ll go back and look at some of your history to see if you’ve taken everything on board. I bet you haven’t.” Apart from that, East Bengal gaffer Robbie Fowler’s post-match interview went well when he was asked about one of his players being sent off.

Mick McCarthy sweeping up in Cardiff

Now that Mick McCarthy has arrived at Cardiff City, you suspect there’ll rarely be a dull moment at the club’s managerial press conferences, his debut on Saturday, via Zoom, a promising start. From WalesOnline:

What’s it like managing a Welsh club? “I am all right with funny bunches, because I come from a funny bunch myself.”

What are you like when not you’re managing? “I am very pleasant, a lovely fella at home. Washing, doing the sweeping up.”

Stephen Kenny’s not won a game in eight, does that increase your sense of regret [about leaving the Irish job early]? “I’ve got Barnsley on Wednesday. That’s my sole interest. Then Millwall on Saturday. If you would like to speak to me about my job at Cardiff then I would love to do so. If not, I am happy to leave the meeting.”

And what about some Cardiff fans not being overly happy with McCarthy’s appointment? “If you form a committee to design a horse you get a camel anyway, someone has got to make a decision.”

“If the next run of games do not go well then I have no doubt they will be out of the title race by the end of February. If that happens then Liverpool will be fighting for their lives to be in the Champions League next season.” Jamie Carragher hasn’t just pressed the panic button, he’s sitting on it.

“Some of those players look like they are shot. There is no sparkle about them. Jurgen will now find out what he has in the dressing room.” Graeme Souness after stealing the panic button from Jamie.

“I think I heard something about this team needs to be rebuilt. The world has gone crazy, and it’s not just the pandemic.” Klopp, possibly reacting to Jamie and Graeme losing the plot.