Özil was there when Arsenal needed him at San Siro 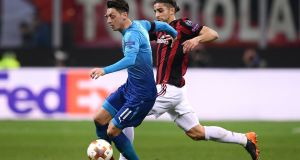 When Brighton beat Arsenal to push Arsène Wenger and his miserable band of men even further into their palace of sadness last weekend, Mesut Özil was nowhere to be seen. It was easy to reach for the old argument that when Arsenal needed this outrageously talented playmaker the most, he was notable by his absence. It has been a vacillating debate ever since Özil arrived in England in 2013, between those who have fallen for his gilded skills and others irked at his ostensibly casual manner.

As with most things, the truth lies somewhere between the two. But it is undoubtedly frustrating in the extreme when Özil disappears from a match, the influence he can have sadly absent. But there was none of that frustration on Thursday night. Arsenal needed a man to open up a Milan defence that had not conceded a goal in the previous 599 minutes of football.

And Özil did exactly that. His passing, in the first half particularly, was sensational; smooth movements here and there as he looked for holes in that defence. He set up the first goal for Henrikh Mkhitaryan with the sort of instinctive pass that only blessed players can see, let alone execute, let alone execute instantly.

The second was less flamboyant but equally effective, finding the perfectly timed run of Aaron Ramsey with a weighted ball. Admittedly, he was not under the most pressure from the Milan players, and you do wonder how he might have fared if a peak-era Gennaro Gattuso had been nipping at his ankles rather than stomping around the sidelines in a sensible fleece.

But that did not matter too much. Özil was there when Arsenal needed him and while you can argue that despite their fine recent form this is generations away from being a vintage Milan team, for Arsenal’s current purposes nobody really cares.

The Europa League means everything to them now. It really does not matter too much if in all of Arsenal’s remaining domestic games Özil sets up an armchair on the halfway line. The Premier League is an irrelevance, even the most hopeful supporter knows they have no chance of finishing fourth. Even Wenger, whose mere presence at Arsenal is a victory of optimism over evidence, essentially admitted last week that the gap of 13 points is too much.

So qualification for the shiniest tournament rests on winning its younger, neglected sibling.

The unlikely but delicious dream, from an Arsenal point of view, is for them to win the Europa League, Chelsea to repeat their 2012 Champions League win and finish fifth in the Premier League, and for Tottenham to finish fourth. With only five teams from one country allowed in the main competition, Spurs would be the ones sacrificed.

The job is not yet done. Arsenal need only remember the last team from north London who scored two goals in Italy and went into the second leg filled with optimism. There is also the concerning fact that they have lost their last six home knockout games in Europe.

But largely thanks to Özil showing up in what rapidly became Arsenal’s biggest game of the season, they are in a strong position to progress. “The worry is how to stop Arsenal scoring,” said Gattuso before the game. “When I go to bed I dream of Özil.” He will be worrying about him for another week.

1 Tipping Point: Eddie Jones’s rhetoric is out of place in a febrile political climate
2 Ireland backrow of O’Mahony, Van der Flier and Stander to be retained against England
3 Triple bogey costs Rory McIlroy as Adam Scott prevails at Riviera
4 Wexford best the weather and Kilkenny on a mad day to be hurling
5 Solskjaer unable to say if Paul Pogba will play for Manchester United again
Real news has value SUBSCRIBE
Crossword Get access to over 6,000 interactive crosswords