So much for the French not caring about Europe; The cost of Euro 2020 for the planet 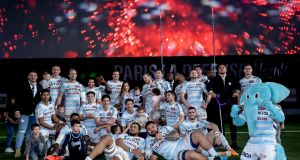 The Racing team celebrate their win over Munster in Paris. Photograph: Dan Sheridan/Inpho

So much for the theory then that the Irish are the only ones who really care about Europe. In his column this week Gerry Thornley explains how: “as feared all along, not only are the French heavyweight trio prioritising the tournament this year, but ditto the English big two of Exeter and Saracens.” Ahead of this weekend’s final round of Champions Cup pool matches, Patrick Madden has compiled an explainer - telling us what teams can still qualify for the quarter-finals and how the seeding system works. A Racing 92 win over Saracens will give Munster a tiny ray of hope in their quest for the last eight, and the Paris club’s current backs and attack coach Mike Prendergast - a former Munster scrumhalf - says the Parisians’ hunger for Champions Cup success will drive them on.

With 51 games set for 12 cities, Euro 2020 will leave a huge carbon footprint as fans criss-cross the continent. In this week’s Pay for Play pages, Ruaidhrí Croke asks what is the cost of Euro 2020 for the planet? “The idea of hundreds of thousands of fans as well as officials and teams flying around Europe between June 12th and July 12th probably isn’t the greatest image for Uefa in a time when the extent of the worldwide climate crisis is seemingly only getting worse and we wake up each morning to new images of Australia burning.” He also has gathered some advice for travelling fans hoping to reduce their carbon footprint, and five carbon-friendly trips (rail trips) between Euro 2020 matches.

1 Harry and Meghan will no longer be working members of British royal family
2 Netflix: The best 101 films to watch right now
3 Terry Gilliam: ‘Adam Driver is either an idiot or the last pure-hearted person out there’
4 Chris Hadfield on the climate crisis: ‘The world has seen much, much worse’
5 Mary Lou has to call for the smelling salts as SF councillor deals a knock-out blow
6 Paul Flynn: Three of my family’s favourite dinners
7 ‘He was some man’: Shane’s journey from care child to fearless activist
8 Peter Casey on the campaign trail: ‘My ideal job would be minister for health’
9 Dublin gangland figures involved in Drogheda feud that killed 17-year-old
10 I’ve handed in my notice and I’m leaving Brexit Britain
11 The cost of a Dublin cottage refurb: ‘We struggled with the mortgage lending rules’
12 David McWilliams: Introduce a congestion charge and make public transport free
13 ‘Good riddance’: British papers react to Prince Harry and Meghan Markle announcement
14 Election 2020: Kerry constituency profile
15 Victim stabbed 28 times has told court he lied to a jury last year
16 Varadkar says Ireland a safe country despite recent violence
17 Election 2020: Waterford constituency profile
18 St Michael’s conveyor belt showing no signs of slowing down
19 Election 2020: Kildare North constituency profile
20 The ‘gangster’ superior, the Irish priest and the wealthy widow
21 ‘Satanic’ sect kills seven people in Panama
22 Welcome to Iten in Kenya – home of champions and cheats
23 Netflix has revealed its most-watched content. You might be surprised
24 Glasgow slam European door shut on Munster
25 Premiership Rugby confirms Saracens will be relegated
26 The most exciting Irish restaurant, from a young team, in years
27 Why did reporter Christine Chubbuck shoot herself live on air?
28 Who was murdered teenager Keane Mulready-Woods?
29 Family of murdered teenager were sent video purporting to show killing
30 Boeing identifies new software flaw in grounded 737 Max
31 ‘My boyfriend loses interest in sex after he orgasms’
32 So what is the meaning of Lowery’s existential fable ‘A Ghost Story’?
33 The real Sound of Music: Maria was no ‘flibbertigibbet’ and she didn’t teach the kids songs
34 Dublin housebuilder records €11m gain after striking deal with bankers
35 Erectile dysfunction or performance anxiety? This is not about sex, it is about shame
36 Varadkar says Greens need to show how ‘extreme’ carbon cuts can be done
37 How to . . . keep your kids safe playing Fortnite
38 Brianna Parkins: Being Australian means knowing the land you love could kill you
39 ‘Drinking less is easy – I really believe that people can do this’
40 United Ireland in sharp focus as Sinn Féin MP woos Irish America
Real news has value SUBSCRIBE