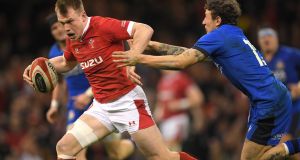 Wayne Pivac is preparing for the biggest match of his coaching career on an afternoon in Dublin when the weather is forecast to do its worst. The new Wales coach started with a comprehensive victory over Italy last Saturday, but knows that was a tea party compared with what his side will face against the last side to defeat them in the Six Nations two years ago.

Pivac has fond memories of the Aviva Stadium, the ground where the Scarlets team he coached won the Pro12 final against Munster 46-22 in style in 2017, but Saturday will be markedly different in terms of exposure and intensity.

He has made one personnel change from the side who defeated Italy 42-0, Nick Tompkins starting at 13 after making a try-scoring debut from the bench and George North moving to the wing, where Johnny McNicholl joins the replacements.

“It will be a step-up and a stern challenge in Ireland’s backyard.” Pivac said. “It will be a real test to see where we are at, and how much work we’ve got to do to be able to play the game under pressure. We will have a positive attitude: you do not score points without one.”

Pivac will be speaking to Romain Poite, a referee with a reputation for rewarding the dominant scrum, after raising concerns with World Rugby about some of the decisions that went against Wales in the set-piece last weekend when the Pontypool-born official Luke Pearce was in charge. Wales felt they should have had more reward for scrummaging straight, a reason why the front row remain unchanged.

“We have had clarity after sending clips to World Rugby,” Pivac said. “I will speak to the referee, and it is important we understand where he is going to come from in the scrum and at the breakdown. We are just asking for a square scrum.”

Pivac said he resisted the temptation to name an unchanged side because of the impact Tompkins made from the bench against Italy, first when he came on for 11 minutes at outside-centre when McNicholl was having a head injury assessment and then at 12 for the final 28 minutes when he scored the try that reinvigorated a side who had lost their way.

“We felt we could not leave out Nick, and George also played well,” Pivac said. “Nick reproduced what we had seen in training. He conducts himself well off the field and is a true professional. He is very impressive.”

Tompkins, who qualified for Wales through a Wrexham-born grandmother, has already been christened with a nickname – Neil.

“Alun Wyn Jones was speaking to Owen Farrell [Tompkins’s Saracens clubmate] and remarked that Neil was a good lad,” said the centre. “Owen did not understand what he was going on about until it dawned on him that Alun Wyn had got my name wrong, so Neil is sticking now, unfortunately.

“I wasn’t expecting to play for Wales, or international rugby at all, as England had never contacted me. When it came along there was no chance I would say no, and to start is a dream.” Ireland’s last defeat in the Six Nations was against Wales last March. They arrived in Cardiff with a chance of winning the title, but left well beaten as their hosts celebrated a grand slam. That experience still vexes Ireland captain Johnny Sexton.

“Any time you lose playing for Ireland it never leaves you. You think about it a lot and that was one of those days. We are playing against a team coached by someone different so that means it is new. We got used to Warren Gatland’s way of playing: it posed us problems and we had some great battles. We know Wayne Pivac from when he coached the Scarlets, so we have some idea of the way they are going to play.”