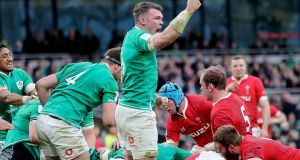 Peter O’Mahony celebrates during the Six Nations match against Wales at the Aviva stadium on Saturday. Photograph: Bryan Keane/Inpho

As Andy Farrell has maintained all along, and as Johnny Sexton reminded anyone prepared to listen in the aftermath of this hugely heartwarming win, they haven’t thrown the baby out with the bath water. Here there was a bit of the new along with the old.

Amid all the revisionism of the Joe Schmidt era, it’s probably been forgotten that there were plenty of times when Ireland began games with an intent to pass, run and use the full width of the pitch.

Even so, you sensed a greater freedom in the way Ireland set about Wales here. In the opening 10 minutes, Ireland made 35 passes to five by Wales, with the outside three of Andrew Conway, Jordan Larmour and Jacob Stockdale on the ball 11 times.

Not only Larmour, but both wingers seemed to have licence to roam, and the approach earned attacking platforms which would have yielded more were it not for a scrum penalty against Tadhg Furlong, which infuriated him, and a turnover at a lineout maul.

Eventually, after being frustrated for almost a quarter, Larmour jinked through and after a Welsh sucker-punch, the pack re-asserted their control off a scrum for Furlong to be driven over by Peter O’Mahony and Rob Herring.

Whether Ireland will be able to bring the same ambition to Twickenham remains to be seen. In Farrell’s view, this was the right approach last Saturday, but might not always apply.

“It’s decision-making, that’s what it is. Last week, some of our decision-making was poor. Some of that involved getting it to a bit of width, but what we did on the back of that was some poor decisions.”

“But I thought it was the right thing to do, a bit of space there in the second- half we could have got to the width as well.

Whether the holes are there, people need to make decisions and be accurate with it.”

Thereafter, playing into the wind after the turnaround, there was something of Ireland 2018 in the way the pack motored over for a lineout maul try and then even more so after withstanding a Welsh siege which saw Hadleigh Parkes almost score before David Kilcoyne helped engineer a key turnaround in the scrums.

It felt even more like the relatively recent good old days under Schmidt – Conor Murray’s box kicking and Ireland’s tackling and recycling pinned Wales down before Conway’s fine finish from Larmour’s pass when taking one for the team.

In the process, Ireland emulated their bonus-point win over Wales here two years ago to end the Grand Slam champions’ eight-match winning streak in this competition and made it three home wins in a row over them after augmenting last September’s warm-up win over a strong Welsh side.

When Schmidt took over, lest we forget, Ireland’s previous Six Nations campaign had ended in the only Championship defeat by Italy and the only bottom-half finish since 2008. Now, as well as raising the bar like never before and establishing many good habits, another of Schmidt’s legacies was to build a very good squad.

To Farrell’s credit, he could have bought himself more time in just satisfying the all-prevailing change for the sake of change, but instead he stuck with the bulk of the team he inherited.

The performances of the Munster trio at the heart of these wins, O’Mahony, CJ Stander and Murray, have all justified the faith shown in them.

“They have been themselves, a driving force all week for the team, driving the team on to the performance they gave out there,” said Farrell almost matter-of-factly. “I suppose they hear all the noise and they have been up for press so they have been answering questions but it doesn’t affect players of that quality.”

You sense Farrell and Johnny Sexton have almost become a little weary of the constant questioning of Murray’s form. Here, Ireland’s greatest scrumhalf passed very crisply in maintaining the home side’s tempo along with Sexton.

“Outstanding. Outstanding,” repeated Sexton when asked of Murray’s performance. “He was brilliant all day. His little snipe off the maul in the second half with the offload out the back from Bundee to me was top class and that gave us the field position into the corner which built a lot of pressure on them from there.”

“His box kicking – which sometimes when you do something so well and then suddenly everyone gets sick of it and they start giving out about it – but it won us the game. The few box kicks that he did in the second half that created pressure on them were outstanding in such tough conditions. I’m delighted for him. I’m absolutely delighted for him.”

Sexton is also putting his stamp on the captaincy, both in his improving relationships with referees and in calling a team meeting on Friday evenings a la Owen Farrell with England.

Farrell senior believes the captaincy is even improving Sexton – his performance here was yet another overlooked man-of-the-match award – as a player, and added: “Honestly, it’s new to him and you can ask him – I’m asking quite a bit of him and he’s coming to the table with his own ideas. That’s exactly what we want.”

As satisfying as this win was, Sexton also knows Ireland need to be better in Twickenham.

“Look, Wales are World Cup semi-finalists and Grand Slam champions for a reason. They’re a top-quality team and they’re hard to play against. So yea, we’re going to have to be up there like we were today but it’s away from home and it’s against a team who were World Cup finalists and will be hurting from last week, although we don’t know what’s going to happen today [against Scotland]. But they’re a top-quality side and the last two times we’ve played England they’ve given us a right old spanking. So we need to up our game from those levels of performances.”