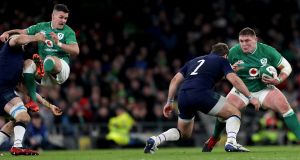 Three thoughts spring to mind whenever Tadhg Furlong sits among the media. The size of him (yet twinkle toed agility), the importance of not taking life too seriously and just how representative this Wexford man is of GAA heartlands.

Anyone from Campile to Timahoe could slip into easy conversation with Furlong about any number of unimportant matters.

His light touch is exemplified by a bellyaching laugh when remembering the terror on Andrew Porter’s face inadvertently caused by Dave Kilcoyne’s – since cleared – concussion against Scotland last Saturday.

“Ports had a good run at loosehead there for a while which, jeez, would be scary enough. He hadn’t done a rep at loosehead for lineouts. We had one lineout, it was a five man, and we came out of the huddle and I see Port’s face going white. I just said ‘You are not involved Ports, you are all right, carry on!’ You could see him calculating, ‘What am I...’ It’s not a place you want to be in an international rugby match, 30 metres out from your own line, seven points ahead, it’s not great like!”

Whatever comes of the Andy Farrell management, one masterstroke has been to add this Lions prop to a leadership group that includes three men educated at Holy Ghost schools in south Dublin, along with the Munster and Ulster captains.

The 27-year-old’s value to Irish rugby cannot be overstated – as proven by last Saturday’s ridiculous shift peaking with a try-saving tackle on Hamish Watson after 74 minutes – but there’s also his intangible contribution.

“Tadhg’s got a great rugby brain,” said Johnny Sexton, “for a prop”.

“He’s one of a kind in that regard.

“Off the pitch, he’s got his finger on the pulse, in terms of knowing the mood of the group. He’s been outstanding since he’s gone in there. It’s been good for him.”

Temporarily rattled before attending the first meeting – “You’re looking into a black hole” he admitted – alongside Sexton, O’Mahony, Henderson, James Ryan and Garry Ringrose, he’s since found his groove.

“Some of the stuff takes me massively outside of my comfort zone but, that being said, Andy wants the players to really lead it and take responsibility and ownership,” said Furlong. “I like thinking about the game, I probably think about the game too much sometimes. It’s nice to have that responsibility, I suppose, and [to be] a voice for the front row.”

An example of such discomfort is sought.

“Talking up in groups and stuff. Some of the general things, outside [scrums], I would find that uncomfortable. Some of the really culture-based things, what we stand for, not just on the rugby pitch but as a group, that would be something that’s very new to me and something that really challenges my thinking.”

The benefit of Furlong being prompted to influence the collective can have far -reaching benefits he has yet to realise himself.

“It stimulates your thinking,” he repeated.

There ended the serious section of Furlong’s group interview as talk turned to Storm Ciara’s threat to a Six Nations spectacle, which in turn sparked a comparison to Ireland’s bad karma after insisting on an open roof in Cardiff last year.

“That is over my head now.”

The roof is over everyone’s head, Tadhg.

“You can’t close the roof at the Aviva. We didn’t start well that day. They did. They came all over us, swarmed us, it was a bad day at the office.”

The calf cramping caused by Kilcoyne’s one-minute cameo last weekend – which forced Porter to loosehead and the longest international in Furlong’s 45 caps – has healed well.

“Australia maybe in November a few years ago [70 minutes in 2016] but I’ve only actually done 80 once professionally.”

In fact, he played three full matches for Leinster during the 2014/15 campaign, which was his first full season.

“You don’t even think about it. Sometimes you are just literally thinking ‘I’m flying here, don’t take me off’ and sometimes you are banjaxed and you see the sub front row taking off their jackets and you are thinking, ‘okay’ and are happy to get off the pitch, but you just play, don’t you?”