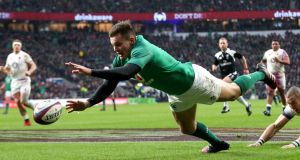 Jacob Stockdale has been voted the 2018 Six Nations Player of the Championship. Photograph: Billy Stickland/Inpho

Jacob Stockdale has been voted the 2018 Six Nations Player of the Championship.

The 21-year-old winger scored a record seven tries in his maiden tournament, as Ireland conquered all to claim a historic Grand Slam.

Stockdale made his international debut last June against the USA and has gone on to start nine Tests - scoring 11 tries and coming out on the winning side in each fixture.

And he received 32 per cent of the public vote - eclipsing fellow Championship winners Conor Murray (18.2%) and Jonathan Sexton (18%).

Keith Earls finished fourth with 14.5% of the vote after a stellar campaign on the opposite wing, with Italy’s impressive Matteo Minozzi coming fifth with 13.2%.

In winning the award Stockdale follows in the footsteps of fellow Ulster winger Tommy Bowe, who was named player of the Championship in 2010.

On receiving the award, Stockdale said: “It’s been a truly memorable few weeks, making my first Six Nations appearance, winning the Championship then going on to complete the Grand Slam against England. Breaking the try-scoring record was the cherry on top!

“It’s an absolute honour to win Player of the Championship, especially when you look at the amazing calibre of those shortlisted. Thank you to everyone who voted and for all the fans who gave us so much support throughout the Championship.”