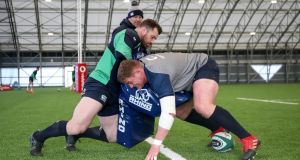 Scotland’s kicking was poor in Dublin, allowing Larmour to show flashes of menace as he countered from the backfield and carried for 154 metres. It is unlikely Wales will be as accommodating with the boot.

Conway was on the periphery for much of the Scotland game but looked sharp on the rare occasions he was fed the ball. Prowess in the air will be important against the Welsh.

Henshaw doesn’t have the attacking craft and guile of the injured Garry Ringrose but he remains an elite option in midfield and can mix it with Wales physically, which will be key.

Aki justified his selection ahead of Henshaw for the Scotland game with a solid performance on both sides of the ball. A match-up with compatriot Hadleigh Parkes will be a bruiser.

Stockdale looks primed and ready to wreak havoc providing he’s let off his leash. There won’t be many chances against Wales, Ireland must hope they fall to the Ulster winger.

Sexton showed no signs of ring rust as he captained Ireland to victory over Scotland, scoring all their points in the process. More of the same is needed against the defending champions.

Murray has done enough against Scotland to retain his place ahead of John Cooney. His box kicking was good at times but he didn’t offer much of a threat around the fringes.

Healy played out of his skin against the Scots and a powerful performance was complemented by the cutest of passes to send skipper Sexton over for his crucial try.

On the whole the Irish lineout was fine against Scotland and Herring rolled his sleeves up on an attritional afternoon, but you feel he needs a big performance to keep Rónan Kelleher at bay.

Furlong has seen off a calf injury to retain his place on Saturday. He tackled and carried relentlessly against Scotland and a similar afternoon awaits the world’s best tighthead against Wales.

Ireland have to match Wales in the collisions and Ryan is their best hope of doing so. His tackling is second to none and his lineout work becomes more efficient by the day.

Henderson was a monster against Scotland, destroying them at the breakdown and putting the squeeze on at the lineout. Deserves his place again, ahead of Devin Toner.

O’Mahony was called into the fray early on against Scotland and played as though affronted by his original demotion to the bench. Saturday’s match will be a war and Ireland need him.

Van der Flier was tireless against Scotland, putting in a huge shift defensively, and he must match those efforts against a Welsh backrow packed with power and intensity.

Stander was super-human against the Scots, with 17 carries, 15 tackles and the match-saving turnover. Like O’Mahony, played as though had a point to prove – and boy did he prove it.