England captain Owen Farrell is looking for his side to maintain their World Cup form into the Six Nations. England finished as runners-up to champions South Africa in Japan. Video: Six Nations 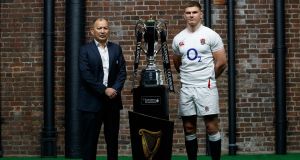 England delivered arguably the finest performance by any team in world rugby last year. Their 19-7 win over the All Blacks was a perfect display of intensity, measured aggression, application and execution. Unfortunately for them, they peaked a game too early. Eddie Jones’ side couldn’t replicate their semi-final performance in the Rugby World Cup final, where they were unable to lay a meaningful glove on winners South Africa.

On their day England can beat anyone but their biggest enemy has been consistency. They began last year’s Six Nations with a stunning statement victory in Dublin, blitzing title holders Ireland 32-20. However, they were beaten 21-13 by Grand Slam winners Wales in Cardiff in round three and finished the tournament in second place. The challenge for Jones and his side is clear - find a way to regularly reproduce the type of performances which can make them the world’s most dangerous side. With both Wales and Ireland travelling to London this year, and with the likes of Tom Curry, Sam Underhill and Maro Itoje still improving, England look like champions elect. However, consistency will be key.

With Ireland, Wales, France and Italy all under new management Jones - heading into his fifth Six Nations as England coach - will hope to have the upper hand on his closest rivals. The Australian took the job in 2015 with the remit of turning England into world champions, and it will have been galling to have come so close to achieving that goal in Japan. Jones still has two years left on his contract which he has insisted he will fulfil, offering England stability as another World Cup cycle gets underway.

Ahead of the Six Nations Jones - who turns 60 on January 30th - has freshened up his backroom staff. New forwards coach Matt Proudfoot joins from the Springboks having guided their formidable pack to a World Cup title, while Simon Amor will oversee the attack. These new additions show Jones has recognised areas for improvement and his willingness to adapt could be key in the coming tournament.

Owen Farrell was agonisingly close to lifting the Webb Ellis Cup as England captain, and that disappointment will surely fuel the Saracens outhalf over the coming weeks. Farrell’s place kicking wasn’t at his best in Japan but he was an inspirational presence regardless, driving the standards which propelled his side to the final. His ability to play at outhalf or in midfield - with George Ford taking the number 10 jersey - gives Jones plenty of flexibility in the backline, and he is one of the world’s best defenders whether in the 10 or 12 channel. The son of Ireland’s new coach Andy, he can get one over his old man at Twickenham in the third round of the championship.

One half of England’s ‘Kamikaze Kids’ - the most dynamic backrow duo in world rugby - Tom Curry was one of the breakout stars of the Rugby World Cup. Named man of the match in the semi-final win over the All Blacks, Curry’s all-action style is as effective as it is endearing, and at just 21-years-old the Sale Sharks flanker has an exciting future ahead of him. Curry made the most tackles in last year’s Six Nations with 86 and has now proven he can mix it with anyone. Curry and Sam Underhill demolished Australia’s David Pocock and Michael Hooper - two of the great backrows - in Japan, surely an ominous sign for the coming championship.

England thrashed Ireland, France and Italy but were outfought and outthought by Wales in Cardiff and ended the tournament with a freak 38-38 draw against Scotland at Twickenham. They finished in second place, five points off winners Wales.

With Ireland and Wales heading into the championship with new coaching set-ups the title is England’s to be won, however the Grand Slam will be difficult in what looks like a competitive year. First (No Grand Slam).

All too predictably, the same pack that failed at the 2019 World Cup could not turn the page