Scrums in the spotlight as Ireland iron out some issues 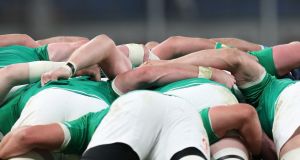 Ireland players in a scrum at their Six Nations Championship match against Scotland on February 1st. Photograph: Russell Cheyne/Reuters

Following Friday’s captain’s run in Aviva Stadium, a great deal of scrutiny will fall on both the Irish and Welsh scrums on Saturday as both teams wrestle with the interpretations from last weekend against Scotland and Italy respectively.

Ireland’s Cian Healy could be heard questioning French referee Mathieu Raynal, who penalised the loosehead prop twice in the set-piece, much to Healy’s irritation and confusion.

New head coach Wayne Pivac has said that Wales have since been in touch with World Rugby’s head of referees, former Ireland scrumhalf Alain Rolland, seeking clarification on those decisions.

Both Ireland and Wales have selected the same set of frontrow players as last week to start the second match of their Six Nations Championship series.

But Irish scrum coach John Fogarty believes Ireland have ironed out the issues that beset them, especially those that troubled Healy, normally a hugely reliable scrummager who will win his 96th Irish cap on Saturday.

“What happened around the referee was around the head space,” explained Fogarty. “The lads were setting down and Scotland would come down on top of his head. So he moved his head, which would open up a joint.

“That was what the conversation was about. For us to manage ourselves in that space, that’s what we did during the week. We problem-solved a little bit. Cohesion with our front rowers, all nine of them, has been important this week.”

Fogarty inferred that not all of the problems on the first day lay with the Welsh and Irish players; there was also a period of bedding-in for the referees. But the former Ireland hooker turned coach is pleased that French official Romain Poite will take charge of today’s match.

“There is always going to be that communication between Alain Roland, World Rugby, and the countries,” said Fogarty. “I thought it was a difficult first day for them as well. There was a lot of wait at the bind stage.

We want to make sure we are showing clear, clean pictures but we want to create moments as well

“But again we are lucky that we have Romain Poite. He is a very good ref. He manages the situation really, really well. Wales have been talking about making sure they are nice and clean. We’d be much the same. We want to have a good game. Like Rob [Herring] said, we want to create moments for our home crowd to get into. We don’t want to slow the game down by being messy in that part of the game.”

Just last week former Irish captain Brian O’Driscoll used a golfing analogy to explain the importance of the set-piece in rugby. He said it was equivalent to the short game in golf. Players have to practice and get their short game right or they will struggle to put scores on the board.

“We need to have nice control to our crouch. To bind we want to be in a good position and we want to get the boys good entries on set. That’s what we are focussing on. We are keeping it as simple as that.”