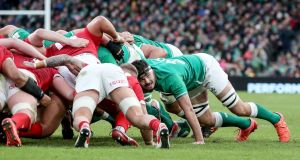 Ireland’s Max Deegan in action during a scrum in the Guinness Six Nations Championship Round 2 match against Wales in the Aviva Stadium, Dublin on Saturday. Photograph: Dan Sheridan/Inpho

Jacob Stockdale and Andrew Porter were 20 years old. James Ryan and Max Deegan were both 19. In June of 2016 the Irish team had just beaten New Zealand for the first time in the Under-20 Rugby World Cup. Deegan would be named the World Rugby U-20 Championship Player of the Tournament, with the Lansdowne man receiving his award after the final, in which Ireland were beaten 45-21 by England.

The following year number eight Caelan Doris and hooker Ronan Kelleher would also filter into the underage pool, with Doris captaining the side in the 2018 campaign.

All six players have featured in the first two Irish wins under Andy Farrell – Stockdale, Ryan and Porter established and Deegan, perhaps the most promising three years ago, earning his debut for the last 10 minutes against Wales. Doris lasted just four minutes in his debut last week before a HIA took him out of the game, while hooker Kelleher also stepped up to senior status.

Few could have hoped for such quick returns from a promising bunch and, for Farrell, who was accused of not demonstrating enough innovation against Scotland, three new names have now been slotted in to a changing Irish landscape.

With Leinster backrow Will Connors, also part of the 2016 Under-20 team, hovering around the squad and brought in last week by Farrell when the full extent of the injury to Doris was known, the upswing for changing faces is still in motion.

“We’d a great team back then,” said Deegan, who had almost his entire family in the Aviva stadium. “Always one of my goals since day one playing rugby. You always want to play for your country, so I was delighted to get that first notch on the belt.

“I’ve just focused on myself, enjoying my rugby and working on that consistency, that kind of impact into the game and work around the ball so yeah, yeah . . . The competition in Leinster is unreal. There are so many backrows still there who aren’t even in this squad who could easily be in any international squad.”

Deegan, not unlike Garry Ringrose, came into the Leinster scene with talent but physically underdone, and has worked diligently to fill the jersey more fully but, crucially, without losing his athletic game and mobility around the pitch.

“Yeah, I’ve been working hard in the gym and it’s something I want to continue working hard on,” he says. “The week you have off you put an extra shift in. I never want to lose that [mobility]. I guess you would call it a bit of a point of difference, the main thing in my game. I never want to shy away from that.

“This is not the top,” adds the backrow. “I need to keep going from here, keep enjoying my rugby. I think adding that consistency game-on-game with Leinster. Try to make as much of an impact. The step from here is to keep getting better and keep pushing towards earning the jersey, I guess.”

The new group of players have largely benefited from the upswing in Leinster’s form, with the winning streak of going unbeaten all season bringing a surge in confidence to their play. Ryan, Deegan, Porter, Doris and Kelleher have won 10 and lost no Pro14 games, scoring 4.7 tries a game and they have won all of their pool matches in the European Champions Cup. Twelve of the 23-man Irish squad against Wales were Leinster players. But it takes a Munster man to sum up the current mindset.

It’s 100 per cent not arrogance. But it’s definitely a confidence about how you go about things

“I definitely don’t think we need to be arrogant,” says prop Dave Kilcoyne, who was taken off against Scotland for a HIA but recovered to replace Cian Healy against Wales. “But there’s a big difference between arrogance and confidence. You won’t do anything in this competition unless you’re confident in your own ability. If you don’t back yourself why should anyone else back you.

“I think everyone in the squad understands that. And Faz is instilling that in us. You know, it’s 100 per cent not arrogance. But it’s definitely a confidence about how you go about things. I suppose confidence breeds confidence.”

From that all good things can spring. Kilcoyne didn’t demonstrate as much confidence as willingness and recovery. Along with Doris, the loosehead left the match against Scotland last week with a head injury.

While the number eight didn’t come through the head injury protocols over the last week, Kilcoyne did hit his marks despite being knocked out.

“My week was a bit hampered with doing the return-to-play protocol. I wasn’t able to help the lads prepare as much as I would have liked, but I made all my markers in the return-to-play, all credit to the physios and the medical staff for getting me back. And no ill effects today,” says the 31-year-old.

“It happened so quick. I think it was [Rory] Sutherland, I came in wrong and he hit me right in the temple and I was out for a second, and then you get back. I was off the pitch and thank god Stuart Hogg knocked on that ball while I was off. I actually couldn’t remember that at the time. But perfect now, all good.”

All good too for Farrell and Ireland and for the graduates of 2016 and 2017, all now one win away from a Triple Crown in Twickenham.