No hot showers for Wales players after loss in Donnybrook 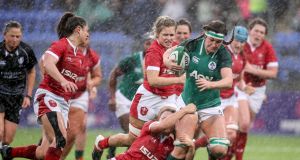 Way back in 2013, after Fiona Coghlan’s Ireland completed the Grand Slam in bitterly cold conditions at an old rugby club outside Milan, the newly crowned Six Nations champions returned to their changing room to find no hot water in the showers.

Ireland flanker Dr Claire Molloy, who was suffering from hypothermia symptoms, had to be whisked off to the team hotel.

The Wales women’s team had no such luxury at Energia Park in Donnybrook. For the record, there was no hot water in Bective Rangers FC, unlike Old Welsey RFC where steam rose from the Ireland team’s piping hot facilities.

A story that should focus on Ciara Griffin’s well drilled team banking their second win (31-12) of the championship, instead highlights the treatment of elite female athletes in 2020.

“We are all cold and it doesn’t help that we got cold showers,” said Wales outhalf Robyn Wilkins after playing in atrocious conditions.

The IRFU issued an apology with the problem seemingly related to damage caused by Storm Ciara. One solution – to walk the women from Bective over to Wesley – was understandably rejected by the Wales players and management.

“The IRFU have apologised to the Welsh team following an issue with the water heater in the clubhouse they were changing in, and we will also be sending an official apology to the Wales Rugby Union,” said an IRFU spokesperson. “The water had been checked, as it always is, after half-time and it was hot. It seems that [by full-time]it had run out of hot water which we believe is due to storm damage from last night [Saturday]. There was something wrong with the tank.

“We brought in heaters, extras teas and coffees, to try and keep everyone warm. We did offer for them to go up to Wesley and they didn’t take us up on that.”

The Welsh squad changed without hot showers in order to attend the post match function with Ireland before their flight home.

The Irish Times understands that Bective eventually found a solution to the problem so hot showers will be available for the Belvedere and Castleknock schoolboys who face off in Monday’s senior cup match at Energia Park.

“Of course this is not ideal for international rugby players,” the IRFU spokesperson added. “And it hasn’t happened before.”