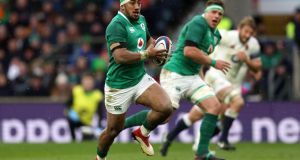 Bundee Aki: played a key role in CJ Stander’s exquisite Irish try which showed the scale of the team’s ambition on the day. Photograph: Paul Harding/PA

Despite the success of scores of Irish people achieving greatness in the arts and business world, there remains an ingrained resistance in Irish society to believe that our sporting teams can achieve greatness on the world stage.

When I was Leinster coach in 2002, I remember speaking at a dinner after our team had recently won the inaugural Celtic League and then narrowly lost a quarter-final of the Heineken Cup to Leicester.

I said I believed that within five years, Leinster were capable of winning the Heineken Cup. Many in the audience laughed. I have never forgotten their ignorant contempt for ambition. Not blind ambition, but a belief based on talent and undeniable potential. In the future seasons the Leinster players justified my optimism.

That night, the concept of Irish teams lifting major international trophies was beyond the imagination of an audience culturally conditioned to failure.

One week on from Ireland’s victory at Twickenham and that cultural barrier is shattered.

In the past when Irish teams have played outside Ireland, the concept of “kicking long and hoping for the best,” was the norm. In Irish hearts the understanding was that a valiant failure, “giving it a lash” was to be expected.

The key factor in this Irish team’s winning the Grand Slam was ambition.

They dared to dream, then applied hard work and world-class systems across the entire organisation.

In the recent past, Ireland won championships without reaching greatness because they lacked the ambition to attack and declare themselves on the world stage. This Grand Slam was won by reaching for the highest of world standards. The wide defence still needs work, but they are working.

The try by CJ Stander at Twickenham, personifies the change in mindset that the Irish team has undergone.The great ambition to attack England exploded before our eyes in this wonderful set-play.

Joe Schmidt believed that Eddie Jones was planning to try and stop the famous Johnny Sexton “runaround” play. Sexton’s “give and get back” ball. It was invented at Randwick rugby club in Sydney in the1980s. Eddie Jones played for Randwick at that time. When Eddie coached the Brumbies at the turn of the century it was performed by the great Stephen Larkham on many occasions.

The key was to create a variation of the theme and call Eddie’s bluff. On a day when there was a lot on the line, Ireland showed their ambition in calling this giant of a play.

The genius was to get the unexpected figure of a tighthead prop to be the ball playing central figure of a great deception. Rugby’s “Oceans Eleven” at Twickenham.

Tadhg Furlong performed a 180 degree “circle ball,” dummying to Johnny Sextons on the runaround. The bait was dangled and all English eyes were on Sexton.

Most props will tell you that they are outhalves trapped in a frontrower’s body. We have all learnt to ignore them at such times, but Furlong’s pass was an audacious act of skill. A clean break was manufactured from a lineout 40 metres from the English line. Magic.

Aki then plays the next great deception. Instead of passing to Garry Ringrose on his outside, he picks up the play’s intended receiver, CJ Stander, on Aki’s inside.

Brilliantly conceived and executed to a level of precision not witnessed before in Irish rugby. On the biggest stage, away from home in a hostile environment, Ireland were precise, ruthlessly accurate and hugely ambitious.

That is new for Irish rugby and that is why they won. More power to them.

Ireland performed with a mental strength forged with the unshakable understanding that “you have done the work and have earned the right to win”. Not blind faith or an emotive hype. A deeply-centred belief earned with sweat.

Ireland are number two in the world, so now is the time to build on this newly discovered ambition.

This generation is capable of accepting the challenge of winning a World Cup. It is hugely ambitious and I know most of you reading this are thinking that it is impossible. Just like the audience who laughed at me in 2002.

Well I got news for you baby and it’s all good. As my daughter says to me, “Your thinking is sooo, like, last century”. (Still be home before midnight my darling girl. Sorry!)

This Irish team played so magnificently over the first four rounds of the championship that they travelled to London as favourites and it did not faze them. They were highly planned and it did not restrain them. They were not on home soil and they remained mentally tough. The leadership we witnessed from both staff and players was spirited, intelligent but most of all it was ambitious.

This new Ireland dared to believe they could outthink and outplay England at Twickenham, by attacking them.

Don’t tell me we should not dare to dream of bringing the William Webb Ellis Trophy to Ireland. It’s not being conceited to be ambitious. Now is the time to believe that Irish rugby can perform at the pinnacle of rugbys’ world stage and win.