Matt Williams: I am prepared to give Andy Farrell time but the early signs are not positive

If Ireland perform at the same level as last week, the Welsh will return to Cardiff with a winning bonus point

Speaking ahead of the Aviva clash versus Wales, Andrew Conway and Robbie Henshaw said that last week's Scotland match will have helped prepare Ireland for the coming challenge. Video: John Cassidy 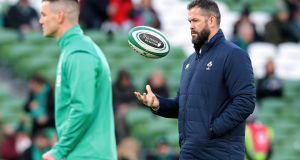 Ireland head coach Andy Farrell watches his players warm-up ahead of the Six Nations match against and Scotland at the Aviva stadium. Photograph: Paul Faith/AFP via Getty Images

Three months after departing, Joe Schmidt is receiving an unjustifiable amount of blame for the state of the Irish national team.

Andy Farrell and his players have to stop playing the blame game and start taking personal responsibility for the team’s performances. If they did not have the courage to face Joe with their concerns when he was their coach, then they should not take the coward’s path and attack him when he cannot defend himself.

Former coaches are a soft target. Believe me I know.

If Farrell and the players want to dwell on the past year, then they should remember that as the Irish defensive coach, Farrell and these players were responsible for England, Wales, New Zealand and Japan running in substantial scores.

It is time for these players and the coaches to start looking in the mirror.

The soft skills of team announcements on Tuesdays and playing music at training will not fix this team’s problems. Hard-nosed leadership, tactical knowledge and technical decisions are required.

After an ordinary performance against Scotland, the Irish coaches all raised their sad little faces and said “we have only had a few weeks with the team”. Implying, “please, please please, don’t hold us accountable for the team’s performance.”

Compare the Irish coaches attitude to that of the new French coach Fabien Galthié.

The French performance against England was courageous and inspiring.

Galthié has had less time with his young, French team than Farrell has had with his established Irish players.

Compared to the French, the position of Farrell, his coaches and the Irish players, lacks credibility.

I am prepared to give Andy Farrell time but the early signs are not positive. He has never been a head coach before and it shows. Rule number one, when at a press conference, know the names of your players.

Farrell must show us he can solve the underlying cause of Ireland’s year-long malaise. That is the alarming lack of aggression displayed by this group of Irish players. Since England defeated them at the Aviva last year, Ireland have not performed with passionate aggression.

Farrell’s primary task is to reignite that aggression. Playing DJ at training won’t do it.

A lack of aggression is often evidence of players possessing a feeling of “entitlement” to the jersey. A right to be selected rather than earning the selection. It is becoming clear to me that many in this Irish team are in a comfort zone. Despite playing exceptionally poorly for a year, the core of the team continues to be selected.

Farrell has selected almost the exact same starting XV that played against New Zealand in the RWC quarter-final disaster. Only Rob Kearney and the injured Garry Ringrose are absent.

Against the Scots, Farrell demanded a return to “old school” forward dominance. He did not get it. The reality was his team were bullied.

The honeymoon is over and the time for excuses is over. Wales are here and they are good. If the Irish players don’t perform against Wales, then new motivated, aggressive players are required.

Here is what Andy Farrell and his players need to fix to win this week.

From kicks Jordan Larmour ran the ball. That is not counterattack. Ireland’s wingers were lazy and did not get back to assist their fullback. The back three must work as a unit in counterattack.

If Ireland counterattack more effectively, it will speed up the rucks and reduce the mind-numbing, stupefying, number of box kicks from Conor Murray. What a blight these are on our game.

Against Scotland we witnessed an offensive system that requires two high-quality passing backs. Without Joey Carbery in the team, Ireland possess only one quality passer in Johnny Sexton. Ireland’s passing interchanges must improve.

The Ireland scrum coach John Fogarty is a great guy. I like and respect him, but the performance of Ireland’s scrum last week was the worst I have seen in many years. Zander Fagerson, the Scottish tighthead, gave Cian Healy a very hard time. If that happens against Wales, Ireland will be defeated.

The Irish defensive system was narrow and left a lot of space in the wide channels. The Scots got around Ireland several times. Only an Andrew Conway intercept and Stuart Hogg “showboating” and dropping the ball over the try line, saved Ireland.

Ireland’s defensive line speed, lacked aggression. In the last Scottish attack of the day, the Scots carried the ball 65 metres, because the Irish defenders did not go forward with aggression. Only CJ Stander’s heroics, in sticking his head into a very dark place and winning a penalty, halted the Scottish attack.

A powerful Welsh team, with no fear of playing in Dublin, will run on to the Aviva on Saturday. Ireland’s home record of one defeat in five years will be under dire attack. If Ireland perform at the same level as last week, the Welsh will return to Cardiff with a winning bonus point.

The Irish players and coaches need to cop on.

There are no more excuses. Ignite the passion to perform with superior aggression, or be replaced.