Speaking ahead of the Aviva clash versus Wales, Andrew Conway and Robbie Henshaw said that last week's Scotland match will have helped prepare Ireland for the coming challenge. Video: John Cassidy 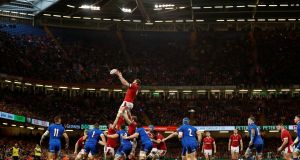 Jake Ball wins a lineout. All Wales’ opening lineouts were off the top with immediate contact on the gainline a prerequisite. Photograph: Andrew Boyers/Reuters

We are vulnerable on Saturday.

Ignore Italy’s approach in Cardiff but focus on Wales. They hit the gain line as quickly as possible. This seems obvious but most teams have ploys and plays that attract attention into an area before exposing in different areas.

Wales consistently did it in one pass. Their first attacking lineout was off the top (OTT) and they hit 12, Hadleigh Parkes, on a classic strike move and immediately rewound where the pass was dropped by George North. But, it was an early indication that Northern Hemisphere sides are looking to isolate less defenders on the blindside; split the pitch if you like. Making life difficult for these defenders to blitz off their line.

Wales continued in this vein whether it be a peel around the front of their next five metre attacking lineout or getting their midfield into the heart of the defence with an immediate shifting of the ball into vulnerable defenders.

Josh Adams’s 18th minute try resulted from the above foundations of quick gainline attack. But this time their OTT lineout ploy sucked Italian right wing Leonardo Sarto into expecting a repeat and he stayed very high in defence but Wales avoided contact and double passed to Leigh Halfpenny who squared up and skinned Sarto with Adams scoring.

All Wales’ opening lineouts were OTT with immediate contact on the gainline a prerequisite. For Adams’s second try Wales mauled their lineout – yet another immediate attack on the gainline!

After an hour Italy had made more metres but none as direct as Wales whose back line running has become far more direct with each ball carrier squaring up his shoulders fixing inside defenders.

Contrast that to Italy and you’ll note a lumbering transfer of the ball way out to the touchline whereupon the Welsh simply bounced them into touch. It looked ‘nice’ and certainly had, at times, lovely skills but it lacked anything like the directness required to beat the Welsh defence.

Speaking of their defence. Wayne Pivac recently noted paradoxically that he didn’t want Wales to defend their title but to win it. However, in winning last year’s Grand Slam, Wales had the best defensive record in the competition at 90 per cent. This meant that Wales didn’t have to play much rugby in the rain to beat Ireland. In fact they were the worst at beating defenders that season. That is not a disparaging remark as Wales were worthy champions but Pivac wants more attack suggesting last season’s 90 per cent defensive stat is under threat.

How can Ireland exploit this and where will Ireland choose to play the match?

Against Scotland there were precious few visits into the Scots’ 22. Ireland of old got into the opposition’s 22 and then battered ad nauseam until the penalty or try came along. That Johnny Sexton scored off eight phases was most gratifying. An area Ireland’s attack can exploit is how the last Welsh forward defends off breakdowns by creating an inward looking highline.

Time and again Wales sent this third man out, high to cut down a ball carrier or the pass akin to Cian Healy’s for Sexton’s try. Ireland are currently operating a series of sliding attacks that square up or a square attack that slides with the aim to get a Welsh player turning in on defence leaving space outside. Around the above last forward is where this combo can break the Welsh line but it needs far quicker ball than last week.

The Six Nations, indeed World rugby, needs a fit and flying Taulupe Faletau and I was fascinated by how Wales employed this class player. They kicked off left against Italy where both Justin Tipuric and Faletau loitered way out on the right hand touchline. That the kick-off was a preordained split kick hitting Alun Wyn Jones left side had me interested as for vast periods of time Faletau stayed wide; mostly on the right hand side and oft times with Tipuric. What are Wales up to?

Stats can often become misleading but my sense is, although he impacted, the Welsh strategy is to keep him in reserve for serious attacking set-ups wider out. This I’ve been hinting at in recent weeks regarding Caelan Doris’s potential ability but Wales are already there. It’s a different set up to New Zealand however with the Welsh inside backs running hard and square, Faletau will have plenty of space to flex his unique skill set.

Wales’ lineout defence was interesting especially when Italy had a five metre attacking platform. Wales stacked prop, prop, second row, second row conceding in the air with a total engagement on the ground to get the Italians back into touch should they hit the front. Italy did, Ireland won’t, or at least Ireland possess far more variety but should be aware of this defensive set up and react accordingly. By the way in 56 scrums in the last Six Nations Wales conceded only five penalties but won 11!

A big scrum is needed from Ireland but especially Tadhg Furlong’s understanding of the referee. Conor Murray noted excitedly this week the myriad of ideas and options flowing into the camp; that’s brilliant; but none however are road tested. Please be patient for we are vulnerable tomorrow.

Finally, I’d like to thank Louise Hart, Sheena Hickey, Eugenie Thornton, Nicky Comyn and all the IRFU who welcomed the 1990 Irish Schools’ Triple Crown winning team for a brilliant 30 year reunion at last Saturday’s international. Our coach David Haslett, our captain David Humphreys, our MVP Neil Nolan and our players, thank you.