Ireland women will aim to reduce penalty count against Wales 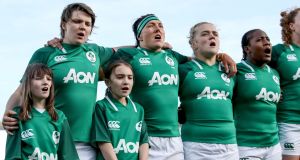 Ciara Griffin and het team-mates will be seeking to bolster their Championship aspirations with another positive result on home soil. Photograph: Inpho

Ireland women’s attack coach Kieran Hallett has admitted there are areas of improvement required if they are to get the better of Wales in Sunday’s Six Nations Championship round two clash at Donnybrook.

Following last weekend’s success over Scotland, the Ciara Griffin-led outfit will be seeking to bolster their Championship aspirations with another positive result on home soil.

“I think probably satisfied is the word we used most. Satisfied that we got over the line and got the win in the end, but certainly not happy with elements of our performance. There’s still a lot to work on going into this week and the next few games,” Hallett acknowledged in relation to their opening round display.

“Defensively, I’m pretty happy with how solid we were overall. We had to defend for a very long period of time. We were still making good decisions. I think even in that second half, we only conceded maybe two or three line breaks.

“I was very happy from that point of view, but it’s our decision-making around the breakdown. I think we gave away 20 penalties in the game. That’s unacceptable from our point of view. When you do that, it just gives teams energy. You’re giving them ins, back into the game.”

Sunday’s encounter will see Ireland coming face-to-face with a familiar opponent. Not including the recent training game between the two sides, they have played Wales in three of their last four competitive fixtures.

As a result, Hallett and the squad are extremely wary of the danger they can pose – in spite of their opening day reversal to Italy in Cardiff.

“Two teams that know each other fairly well, but we treat it as any other game. We do our due diligence in terms of analysing the game against Italy that they played. We’re fully aware that they pose a lot of physical threats.

“Their offload game is very strong and when they’re on the front foot, their attack is incredibly dangerous. From a defence point of view for us, we’re going to have to be on our game to make sure we’re in it,” Hallett added.

The Irish starting line-up shows three changes from the team that secured an 18-14 triumph over the Scots.

Following a recent injury lay-off, Eimear Considine returns to the back-three as an indirect replacement for Aoife Doyle. The Clare native has been selected at fullback, with the versatile Lauren Delany shifting out to the right wing.

With a calf injury - sustained in the final-quarter of the Scotland game - ruling Ellen Murphy out of contention, former Cork camogie prodigy Claire Keohane is named alongside Kathryn Dane at half-back.

Elsewhere, Judy Bobbett (an international debutant in last November’s home Test against the Welsh) takes the place of Nichola Fryday in the secondrow. Having last featured for Ireland at the 2017 World Cup, Larissa Muldoon – a Grand Slam winner seven years ago – is named amongst the replacements as cover for Keohane.