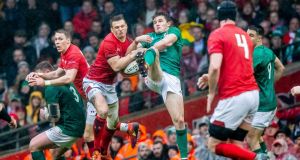 Kick-off: 2.15pm. Venue: Aviva Stadium. How to follow: The Irish Times liveblog will begin at 1.45pm. On TV: Live on Virgin Media One and ITV.

This could get a little stormy all right. It’s been that way between these rivals for some time and adding Storm Ciara into the mix is liable to make for a traditional, get-down-and-dirty Celtic derby.

Although the worst of Ciara is expected to hit the west and north, especially from tomorrow onwards, heavy rain is forecast to arrive around 3ish, with winds becoming strong and gusty.

Along with this unpredictable factor, all but three of the two starting XVs ply their trade in the Guinness Pro14 and of them Dan Biggar and Taulupe Faletau are only recent departures to the Premiership.

Furthermore, 15 of the 30 are also familiar with each other from Lions tours, and you known what they say about familiarity. Certainly no two opponents in the 2020 Guinness Six Nations will know each other so well.

It’s a little early for storm clouds to be gathering over the newly-promoted Andy Farrell and newly-installed Wayne Pivac, but aside from being a Grand Slam and Triple Crown eliminator, the outcome of this game could go a long way toward defining their first Six Nations campaigns. Being at home, perhaps this is even truer for Farrell’s Ireland.

The vagaries of the weather are likely to ensure that, much like the general election, the revolution might be delayed. Conditions are liable to underline the importance of the basics, be it scrum, lineout, maul, kicking game and defence.

Romain Poite is usually a significant figure in matches he referees, and given the likelihood of more scrums in wet weather, this may be even truer today. There were only seven scrums in last week’s game, albeit with countless resets. Both Ireland and Wales were disappointed with some penalties which went against them at scrum time last weekend, and one of them may well be again today.

Poite tends to side with whichever scrum is going forward, by whatever means, and having formed his impression early on, usually sticks with that picture thereafter. Viewed in that light, Tadhg Furlong’s recovery from a calf strain and David Kilcoyne’s wellbeing are welcome. Ireland look to have the stronger scrum to start, and finish, the game.

More unnerving was the relative lack of purchase Ireland extracted from their maul last week. The Irish lineout is a primary source of their tries, and their maul is normally a major strength. It may be no harm that last week’s meagre return must have made it a major focus this week.

It could also be a day for the experienced Conor Murray-Johnny Sexton controllers at the wheel. Sexton hardly showed any signs of his seven-week lay-off last week but should only be sharper for the outing although, that said, with Leihg Halfpenny back to his imperious best, Wales have a superb kick-chase game.

It may even be that the nature of this encounter will also suit the Bundee Aki-Robbie Henshaw axis. Ireland’s work in the collisions and defensive line speed has to go up a notch, and the arrival of the Grand Slam champions will focus the minds. Fifth v fourth in the world rankings, a lesser prize at stake is that fourth ranking.

Yet, as ever, so much of this particular Celtic derby is on the day. Even the toss could be important. Mindful of Cardiff last March, neither side would want to be playing catch-up in the second half. With the rain set to arrive midway through, this looks like a day to take first use of the wind and make it tell.

Last weekend’s opening round was a reminder that away wins don’t come easily in the Six Nations, and hence underlines the old adage that a team has to win its home matches.

Losing a game at home and winning the title can be done. Wales proved this in 2013 when recovering from a 30-22 defeat at home by Ireland to ultimately clinch the title with a 30-3 win in a last-day title shoot-out with England.

However, that remains the only time the championship winners have lost at home since the last time the title was shared between Wales and France in 1988, when the latter’s 10-9 win in Cardiff on the last day denied the Welsh a Grand Slam.

In other words over the last 31 years that 2013 success by Wales remains the only occasion when the champions lost at home. With treks to Twickenham and Stade de France still on Ireland’s itinerary, were they lose to Wales today, the odds on them lifting the Six Nations trophy would probably drift to around the 30/1 mark.

The Welsh arrive with a strut in their stride. Back home, they are confidently expected to win. Coming off the high of a World Cup semi-final, they extended their winning run in the Six Nations to eight with last week’s victory.

But it’s hard to know what to make of that win over an Azzurri whose defence was particularly poor, and that winning run does date back to their last visit here in 2018, when Ireland beat them 37-27.

It’s a notoriously difficult match to call, although Wales haven’t won here in the Six Nations since 2012 and the last away win in the Six Nations Championship between these two was in 2013. And there are usually little moments which matter more when they go with the home team.

Although taking this Irish team’s performance on trust proved a little misplaced in 2019, no less than Wales having benefitted from a preparatory outing against the Barbarians, Ireland should be the better for last week’s hard-earned win over the Scots. They will also be fully aware that while this may not be a must-win in terms of the title, it’s not far off it. In what could be an edge-of-the-seat ride until the last throes, Ireland to edge it.