Ireland under-20s hoping to repeat the trick against Wales 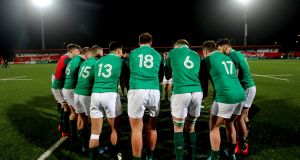 Ireland got off to a winning start against Scotland last week. Photo: James Crombie/Inpho

Noel McNamara’s charges will look to back-up last week’s victory over Scotland, albeit improving in a couple of key areas, as they face a physically robust Wales side in what promises to be a keenly contested Under-20 Six Nations Championship clash.

The visitors will be bolstered by the inclusion of Ioan Lloyd, a very talented teenager, who has already made quite an impression for Pat Lam’s Bristol Bears in English Premiership this season. Selected at fullback, he is equally at home in the outhalf role, and is one of three changes to the team that succumbed to a 17-7 defeat to Italy at home last time out.

Lloyd replaces Josh Thomas at fullback, while prop Theo Bevacqua and hooker Will Griffiths are promoted to a starting role, replacing Callum Williams and Dom Booth respectively; the latter pair along with Thomas are included in the replacements.

McNamara has made a couple of changes to the run-on team, Ballymena’s Ben Moxham comes in for the injured Ethan McIlroy on the right wing, while Clane’s Marcus Hannan takes over from Charlie Ward at loosehead prop. Harry Noonan (Old Wesley) and Cian Prendergast (UCD) are new to the bench with Ward tasked with covering tighthead, having started on the other side of the frontrow against the Scots.

Ireland’s Grand Slam last season was confirmed in victory over Wales at Colwyn Bay. The visitors retain five starters and a further three replacements that night. In contrast Dublin University prop Thomas Clarkson is the only survivor from the Irish starting team. This year’s captain David McCann and replacement hooker John McKee were on the bench.

Ireland scored six tries against Scotland last week, the pick of which were a couple of fine individual efforts from outhalf Jack Crowley and secondrow Thomas Ahern, but will have spoken about being even more ruthless in taking opportunities while also prioritising improvements in defence and the scrum.

Irish defence coach, Kieran Campbell said: “It was probably a bit frustrating for the boys (against the Scots). They didn’t always finish that territorial dominance. But it’s a nice thing to be talking about little issues at this point after a solid win and five points under your belt as opposed to huge under-performance and loss.

“We’re in a pretty good spot. It takes (time) to get cohesion too. On top of that, there’s no doubt they’ll (Wales) bring a different challenge than Scotland. From watching them, there’ll be a level of physicality that’s quite new to our boys. It’s one we’ll have to meet fairly head on, early.”

One of Ireland’s standout performers last week was scrumhalf Lewis Finlay, a quicksilver, dynamic scrumhalf, whose game appreciation was impressive. He’s modelled his game on New Zealand’s Aaron Smith right down to the All Black scrumhalf’s practice regimen. Finlay explained: “I was initially a big Aaron Smith fan, because his distribution was strides ahead of everyone else.

“I admire Faf de Klerk as well. He’s aggressive, not a big guy, but a huge heart. A lot of his tackling and stuff I’d model my game on. I realised it was time to make a point of difference in my game. If it wasn’t going to come through huge athletic gains, it seemed like something consistent that I could develop myself.”

If Ireland can make the incremental improvements that they have spoken about, tighten up defensively and in the scrum, produce a little more cohesion and composure, then they certainly possess the individual talent to maximise that platform. If that situation pertains then they can continue on their winning ways.