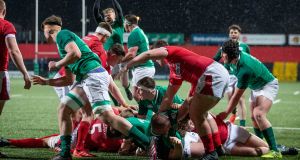 Ireland’s performance bore an uncanny resemblance in some respects to their victory over Scotland, some excellent individual performances and a couple of scintillating tries as they picked up a four try, bonus point win for the second match in succession in the Under-20 Six Nations Championship match at Musgrave Park.

Ireland deserved their triumph but head coach Noel McNamara won’t be oblivious to some of the performance issues, particularly relating to maul defence, discipline, the breakdown and some handling issues. However there is no doubting the character of the group or the talent, something they’ll need in abundance when they travel to face England at Franklin’s Gardens in a fortnight’s time.

The halfbacks Lewis Finlay and Jack Crowley had their moments too. The home side lost centre Hayden Hyde before the game, replaced by former Newpark schoolboy and Trinity student Luis Faria.

Ireland got off to the perfect start, Wales failed to deal with the kickoff and ended up facing a lineout five metres from their line. Despite securing possession, Welsh scrumhalf Daffyd Buckland was a fraction slow and this allowed Ireland flanker Mark Hernan to block the kick and re-gather over the line for the opening try of the match after just 70 seconds. Jack Crowley kicked a fine conversion.

A couple of errors denied Ireland greater purchase on the scoreboard and this coupled with some ill-discipline, as they conceded three penalties in quick succession allowed Wales a foothold in the match. Even though they managed to breach the Irish 22, the home side’s defence was excellent, sharp and aggressive.

Ireland reasserted their dominance on 17 minutes, initially putting the Welsh lineout under pressure and then 18-year-old replacement secondrow Joe McCarthy ripped away possession. A few phases later centre Dan Kelly chose a great line and demonstrated his power to crash through a couple of tackles.

The third try from the home side stemmed from a wonderful catch and counter-attack from left wing Andrew Smith, whose balance, speed and footwork took his past half a dozen Welsh players. Even though Ireland lost possession briefly, fullback Oran McNulty gathered a cross-kick, beat the first chaser and linked with Sean O’Brien, the flanker timing his pass perfectly to scrumhalf Lewis Finlay who scooted over under the posts.

Crowley landed his third conversion and then tagged on a penalty before Ireland threw the visitors a lifeline by spilling ball in midfield. It eventually led to a try from centre Osian Knott, which outhalf Sam Costelow converted.

The home side responded by claiming a four-try bonus point in first half injury time and it came from a clever lineout variation. Brian Deeny didn’t have to jump to secure possession at the front and the Irish maul was set in an instant with Hernan, at the back, touching down for his second try. Crowley’s conversion was a beauty given the conditions.

Ireland were occasionally guilty of being a little sloppy and this resurfaced again at the start of the second half. It cost them three points initially, then a penalty try, as Ireland twice infringed in trying to defend a lineout maul. Georgian referee Nika Amashukeli ran under the posts and brandished a yellow card to McCarthy.

The home side desperately needed to manage the game intelligently but both Irish halfbacks, Finlay and Crowley made a couple of errors that put their team under pressure. Ireland needed to be composed and accurate but instead they became a little frantic; their failure to resource rucks with numbers and a penchant for coming in at the side at the breakdown was hugely debilitating.

Unfortunately for Wales they too racked up a shed-load of mistakes from handling errors to overthrows in the lineout and it was a combination of these two that gave Ireland the field position ahead of their fifth try, a smartly taken score by Smith from a fine pass from captain, David McCann.

Ireland’s maul defence hadn’t been good and it cost them yet another penalty and after getting narrow in defence they conceded a second try to Knott and despite one final scare were able to run out relatively comfortable winners.