Ireland’s Johnny Sexton wins the clash of the captains: the British press react 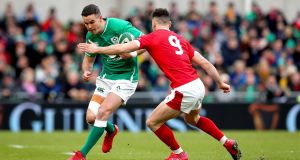 Width, glorious width. Ireland moved the ball against Wales and reaped the rewards, running out handsome 24-14 winners against the Grand Slam champions.

It was Andy Farrell’s second game in charge and it was a serious statement of intent, with Ireland vastly improved from their opening Six Nations win over Scotland.

From the outset the Irish back three of Jordan Larmour, Andrew Conway and Jacob Stockdale were heavily involved, helping stretch a normally miserly defence as the hosts earned a bonus point victory in Dublin.

Ireland now have a week off before a crunch trip to Twickenham to play England, who edged past Scotland in a game to forget on Saturday evening.

And that’s a view which has been echoed in the British media. Writing for BBC Sport, Gareth Griffiths says: “Whatever your view about Wayne Pivac’s first defeat as Wales coach, most would agree with his own assessment that Ireland deserved their bonus point win.

“Defeat in the blustery cauldron of Dublin’s Aviva Stadium will prove chastening for Pivac as he tries to build on the legacy left by Warren Gatland.”

There remains plenty of room for improvement, with Ireland profligate at times and riding their luck when Hadleigh Parkes’ second-half try was harshly ruled out.

However, they were clearly a different beast on Saturday, as Michael Alywin writes in the Guardian: “If a new coach wants improvement with each match, Farrell can have no complaints: this was a notable step up from last week’s win over Scotland. The dark days of the end of Joe Schmidt’s reign are already starting to feel well in the past . . .

“There was an urgency about both teams from the off, as if they knew they had to work fast before the storm came. Ireland’s first game under Farrell could be rated no more than satisfactory, but here they immediately found some joy on the wide outside.”

While Ireland’s fine performance at the Aviva Stadium deserves recognition, Wales were below their best and made a number of errors which contributed to their downfall.

Tomos Williams also dropped a pass on his own line which led directly to Ireland’s second try, moments after he’d crossed the whitewash himself for an excellent Welsh score. As Andy Howell writes for Wales Online, the scrumhalf “is a hot prospect but there remains flaws in his game with defence still an issue.”

The performance of full debutant Nick Tompkins has also come under scrutiny. The Saracens centre scored a try on his debut against Italy but endured a torrid afternoon up against a rampant Irish backline.

Again, Howell writes: “He was deservedly selected to make his first start but facing seasoned operators Robbie Henshaw and Bundee Aki in midfield was a far more difficult proposition.

“The tone was set early on when Tompkins bounced off Henshaw as the 2017 Lion carried and he went on to miss five out of 16 tackle attempts.

“And it’s not exaggerating to suggest he’ll be having nightmares about Henshaw running at him.”

This view is echoed by Steve James in the Times (UK): “Nick Tompkins was given a short, sharp lesson in the realities of Test rugby. Running around energetically against Italy is one thing, defending the notoriously difficult number 13 channel against the committed Irishmen here was quite another.

“It was swift notice of just how good the lame Jonathan Davies is at his job. A reminder too of how strong he is.”

Another narrative ahead of Saturday’s match was the roles of Johnny Sexton and Alun Wyn Jones - opposing captains and each side’s talisman - and how they would deal with referee Romain Poite.

Jones was typically inspired in defeat, making a mammoth 19 tackles and holding firm in the face of Irish pressure.

However, the day belonged to Sexton, who looks every inch the leader two games into his international captaincy. Ideed, in the Telegraph, Oliver Brown writes: “No sooner does Johnny Sexton assume the mantle of Ireland captain than he tries his hand at being the referee, too.

“As a mirror of his team’s glorious defiance against Wales, he was never more convincing than when standing in the face of Romain Poite, demanding clarification from the French official about the maul laws.”

Sexton had said in the build-up to the visit of Wales that Jones is the model captain, particularly when it comes to building a relationship with the officials - but it was Sexton who edged his fellow 34-year-old.

Brown writes: “But this was one day when Sexton won the clash of the captains, embodying Ireland’s cussedness at every turn. Of course, there is still a trick or two he could learn from his wizened Welsh counterpart.

“When Ireland’s president, Michael D Higgins, was introduced to the two teams before kick-off, Jones made a point of flicking up Hadleigh Parkes’s collar, like an irked father trying to make his son more presentable for school.”

And so, it’s on to Twickenham, for a fixture which all of a sudden doesn’t seem quite as daunting.

As Alywin writes, it’s one to savour: “Three games into the new era, and Andy Farrell’s Ireland are playing for a triple crown. They will travel to Twickenham in a fortnight, where Farrell will send out his boys in search of the prize against his homeland, his former employers - against his son. The narrative is delicious.”