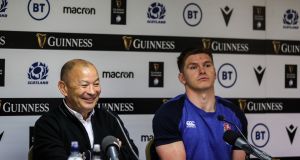 The Six Nations organisers have launched an investigation into the incident before England’s Calcutta Cup victory over Scotland which saw a senior member of Eddie Jones’s coaching staff struck on the head by a beer bottle.

Jones lashed out after his side’s scrappy 13-6 win, accusing Scotland supporters of lacking respect after England’s head of performance, Neil Craig, was hit on the head shortly after getting off the team bus at Murrayfield. Scotland supporters were also seen making obscene hand gestures at the England squad. Jones, who was also deeply unimpressed by the Scotland crowd’s repeated booing of Owen Farrell as he kicked at goal, said: “We weren’t expecting beer bottles to be thrown, that’s a new trick,” Jones said.

“It’s a pretty good achievement, throwing beer bottles, you’ve got to be brave to throw a beer bottle.”

The Scottish Rugby Union released a statement revealing it had apologised to England’s team manager, Richard Hill, and cast doubt on whether the bottle had been thrown. Yesterday the union pointed to new footage which it believed suggested the bottle had been blown towards Craig rather than thrown.

The Guardian understands however, that the Six Nations were yesterday in discussions with both unions over the incident. England triumphed in a scrappy weather-affected game thanks to Ellis Genge’s second-half try. When it was put to Genge that a Scotland supporter had thrown the bottle which struck Craig, he said: “That’s f****d, isn’t it? He’s old, man. He’s like 93. You can’t throw a bottle at an old man. If someone did that to my grandad, I’d lose my mind. I’m glad I didn’t see it. That’s out of order. I wouldn’t wish that on anyone. I’m happy he’s okay.

“I’ll tell you for a fact, if that happened at Twickenham – which it never does – we’d be getting called ‘English this and English that – can’t believe the lack of respect from the English, X, Y and Z’”.

Meanwhile, South Africa’s World Cup winning coach Rassie Erasmus took to social media to deny reports linking him with replacing Jones as England’s head coach. Since the World Cup in Japan, Erasmus has moved upstairs at the South African union, acting as director of rugby while Jacques Nienaber has taken over as head coach. Erasmus was at Murrayfield on Saturday but yesterday created a Twitter account to say: “Not Sure I would know what to say to any other team before a W Cup Final. Not Happening!!!”

The Rugby Football Union chief executive, Bill Sweeney, also strongly denied the report that Erasmus has been in discussions over replacing Jones, whose contract expires in 2021. The day after the World Cup final Sweeney said that it “made sense” for Jones to extend his contract through to the 2023 tournament. Sweeney and Jones have since held talks over a contract extension but no deal has been agreed. Sweeney was adamant however that there has been no contact with Erasmus. “The reports are 100 per cent inaccurate,” he said. “There has been no meeting. There have been no talks whatsoever about any position at the RFU.”

England’s victory over Scotland kept alive their hopes of winning the Six Nations title with Ireland due at Twickenham on Sunday week after the tournament’s first fallow weekend. Jones’s side flew home on Saturday night to avoid the full impact of Storm Ciara which caused severe travel disruption for thousands of England supporters.