Eddie Jones takes swipe at “aggressive crowd without much manners” 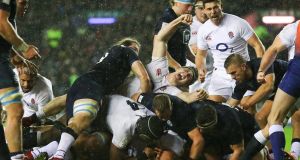 Match winner Ellis Genge hit out at the critics and head coach Eddie Jones took a swipe at the Murrayfield crowd following England’s 13-6 victory over Scotland in the Six Nations.

Genge scored the only try of a hard-fought contest played out in miserable conditions as England bounced back from their opening defeat to France and the hosts suffered a second straight defeat.

“We had a bump in the road last week and everyone was writing us off, saying we weren’t good enough, saying that our coach should be sacked and that the boys were a different team from the World Cup,” Genge said.

“It doesn’t sting but it’s classic isn’t it? You’ve got a lot of sausages saying things that just come to their head and what are they on about? We go out and win in Scotland away in the rain and now everyone’s singing our praises.

“It happens every week — you lose a game and suddenly you can’t play rugby any more. I hope we shut all the critics up and they watched that game.”

Jones felt his side dominated the contest apart from a 15-minute spell early in the second half, but was unhappy that Owen Farrell was booed while lining up kicks.

“That’s an old-fashioned Calcutta Cup game isn’t it?,” Jones said. “Swirling wind, heavy rains, aggressive crowd without much manners — you’ve got to be at your best to win.”

Asked what he meant by a lack of manners, Jones added: “I thought you were supposed to show kickers’ respect.”

Farrell himself was delighted with his side’s attitude, adding: “We’re happy with the performance more than anything.

“To come up here on a day like this, with a brilliant atmosphere like it was today, it made it tough for a game of rugby but I thought we stuck at it constantly for 80 minutes.

“It didn’t all go our way, we made it difficult for ourselves at times but our attitude was spot on I thought. We wanted to be better, we were very disappointed last weekend.”

“We’re gutted,” Hogg said. “We worked incredibly hard during the week to make sure we got to where we wanted to be and unfortunately we just came up short, but credit to England, they managed to control the ball and play in the right areas.

“We had opportunities, we just didn’t make the most of it, but we’ve just got to get on with it, can’t change anything. Same as last week, I’m proud of the boys’ efforts but these things happen.

“We’ve done some good things in the last couple of games but at the end of the day, we’re here to win Test matches and we’ve not managed to do that yet.

“We’ll get back to the drawing board on Monday morning and make sure we’re ready for a couple of weeks’ time.”

Scotland head coach Townsend sought to take some positives from the performances of his side in their first two fixtures.

“It’s difficult because the players are putting a huge effort in and this is a game we always want to win for our nation,” Townsend told BBC Sport.

“But I said to the players last week that we played a team (Ireland) that had only lost once on their home ground in five years and we played a team today that was in the World Cup final and in both games we were in positions to win.

“So that shows the quality we have in our squad. Now we have to make sure when we get in those positions again, we do get the win and the rewards for our effort.”